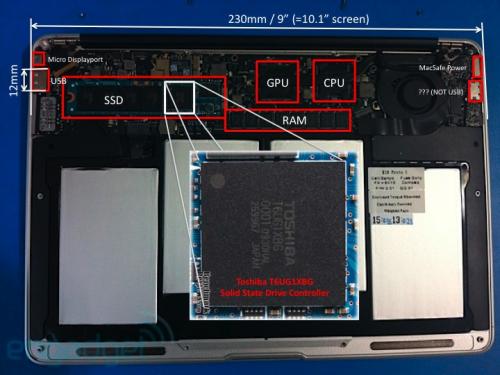 Lotta hot gossip going around about the rumored new MacBook Air that’s potentially being announced on Wednesday, including this purported spy shot. Whether or not the rumors are true is really not important to me at this point, but what is interesting is what they’re reportedly doing, and why it makes sense.

Apple spends a lot of time making sure that their devices look and function well, but it wasn’t until recently that it was relatively easy to replace internal components in your computer. It’s amazingly simple in a Mac Pro (and has been for a while now), the MacBook Pro isn’t too bad, and the newest Mac Mini doesn’t require a putty knife to upgrade the ram. Compare that to the new iPods, iPhones, and iPad, where the devices aren’t meant to be serviced at all, and it’s very difficult to get them apart. That used to be the case with the Macintosh lineup as well, and the rumors say that’s where Apple is going with the MacBook air.

The only real draw to the MBA is the size and weight. It has to be lighter and thinner than a MBP, making it the closest thing to a netbook that Apple will produce. Without the size advantages, there is no reason to by a MBA over a cheaper 13-inch MBP. The image above shows that there is no traditional hard drive in this device, but rather a series of flash chips similar to what’s used in the iPad and iPhone. This does two things: It means that you can’t replace your hard drive, and it also means that they can make the Air thinner.

If true, this means that Apple is returning to its roots. Changing out a hard drive for upgrades won’t be possible anymore, but it won’t matter – the new MBA would offer speed in startup and in use, both of which would draw more customers. Its size could potentially rival the iPad, which is only 1/4-inch smaller at the moment. Imagine a full computer that’s thinner than an iPad but able to perform more tasks? Sounds pretty amazing to me, and I know I’d consider it.

This is rumor mill stuff right now, and we won’t have an answer until Wednesday. But if the MBA is updated, it could be a real game changer for Apple.