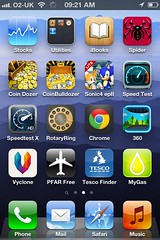 When Scott Forstall left Apple last October, Jony Ive took over most of his responsibilities at the Human Interface department. This means that Apple’s hardware design genius is now dipping his hands into software design.

Ive is said to have a large influence in the development of a future version of iOS, and if the report of the Wall Street Journal is any indication the software design may follow Ive’s known reverence for minimalism.

The reports that that the new iOS verson will be very minimalist and will have a flat design. This does not mean that the new iOS is going to be huge departure from the previous version. According to the WSJ’s report the changes are going to be “conservative” for the most part.

The new design is said to veer away from skeumorphism – a principle where the design is related or connected to a physical object. An example of these are the designs for the calculator, iBooks and the Calendar, which looks like the real objects. Flat design, on the other hand, will mean fewer shadows, bevels and 3D shaping. What we’ll likely see are solid colors and a design that skews more towards text and fonts.

We will be able to see the new iOS version in June at the Worldwide Developer Conference. There is still no confirmation if Ive’s new designs will be made available for iOS 7 but let’s hope it does because iOS is getting a little long in the tooth in terms of visual design.