iPad Plus – Apple Rumored to Have Even Bigger Unicorn...

by Kevin Whipps 12 years ago3 months ago
7 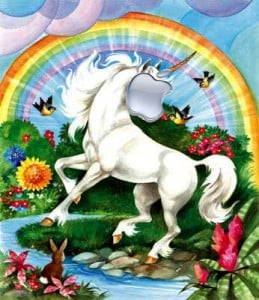 That’s right, the Unicorn is back! I knew you couldn’t get enough of it, so I brought it back so that everyone could enjoy it again. After all, there’s another tablet rumor, and this one is a doozy.

MG Siegler from TechCrunch has a post up today about a new tablet that’s in the design process. This one though, is less iPhone, more MacBook. Here’s a quote:

Now, before I say anything else, take this information with a grain of salt. While it originated from a good source, it was a second-hand source. Meanwhile, Iâ€™ve corroborated some the main details with another source, but not some of the smaller ones. That said, from what Iâ€™m hearing, Apple is pretty far along on work on second tablet device. A bigger one. And this one may be much more like a Mac than an iPhone.

First, I’m going to give MG some credit. He says himself that this is all conjecture, rumors, and could be plain old b.s. Better than spreading the rumor like the truth, anyways (cough). That said, I’m not so sure about this one, and here’s why.

What did everyone want from the iPad? Everything they didn’t get, apparently. They wanted video chat, OS X, and a revolutionary form of using the hardware that would be akin to floating on air with magical wings made of dolphin skin – although, free-range dolphin. What they got was a beefy iPod Touch with more real estate. One thing Steve Jobs does well is stick with something, even if it’s not necessarily the bees knees. I don’t see him coming out with a tablet to usurp the iPad, because that’s going to bastardize the MacBook market, which would cut him off at the knees – at least not yet, anyways.

On the other end of things, I do think an OS X-run tablet may be in the plans, but not until the iPad proves its worth. No one wants it to go down the path of the AppleTV, but if it’s not wanted, then there’s no reason to put more r&d into a bigger and beefier model.

But here’s my prediction: 1 year from now, the iPad will come out with V 2.0 that will really kick the product into high gear. In the next 5 years, we’ll see a tablet with OS X, produced by Apple. After all, if the iPad takes off, I’m not sure what would be holding them back.