You are here: Home / Games / iPad Is Getting Its First Real MMORPG 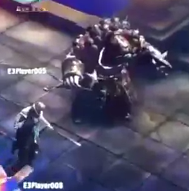 This week is the big video game expo in Los Angeles, E3. And one game generating huge buzz isn’t playable on consoles or even computers. It’s an MMO game of Warcraft proportions, and it’s only playable on iOS devices.

(Okay, so there’s an Android version coming, too. But let’s just pretend that’s not true.)

The game in question is Project Dragon: The Roar From the Dungeon. Developer WeMade, which has a stated purpose of wanting to be the number one games company in the world (y’know, someday), is releasing Project Dragon sometime later this year. WeMade hasn’t released any official artwork, screenshots, or video of the game in action, but the crafty peeps over at AppleTell captured the above video live from the E3 show floor, and it’s pretty stunning.

Project Dragon uses the Unreal engine — the same game engine that powers the Infinity Blade games — and is controlled entirely by gestures. WeMade is expecting it to be a game-changer, because it puts the power of a deep, rich MMORPG world into a mobile device. Which might make it a first. Project Dragon will support up to 5,000 players on a single instance (game server), and comes with all the bells and whistles you’d expect from a major console or PC MMO, including player classes, skill trees, item crafting, PvP matches, and even pets.

Expect to hear more about Project Dragon: The Roar From the Dungeon in the near future.