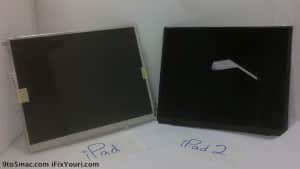 The iPad 2’s display has been caught on camera thanks to iFixYouri. The screen matches recent rumors (thinner, lighter) but its pixel density is not yet known.

9 to 5 Mac obtained pictures of the screen and matched them side by side with the first generation iPad’s screen.

At this point, we cannot tell if the resolution is higher (or “Retina”) but it is definitely higher quality in terms of its build. The iPad 2’s display is also lighter, and over a mm thinner than the current iPad’s display with a smaller surrounding frame.

The iPhone 4’s screen was leaked in the same way but was put under a microscope to study its pixel density. While the iPad 2’s screen has yet to be studied with any machinery, Retina support is being discounted. However, the screen appears to be H-IPS which has a slightly higher contrast ratio. The screen also has an anti-reflective coating.