Adoption rates for new operating systems are always a good measure of success, and if the iOS 7 adoption rate is anything to go by, Apple’s latest mobile OS is certainly a success. In spite of all the “issues” that have been attributed to iOS 7 – from excessive battery drain (it’s an iPhone guys!) to feeling dizzy thanks to parallax – Apple users seem to have jumped on iOS 7 quickly.

Mixpanel, a mobile analytical firm, has estimated that the iOS 7 adoption range is anywhere from 88 to 90 percent. These figures were obtained using Mixpanel’s real-time adoption stat tracker, which also monitor’s Android’s figures. 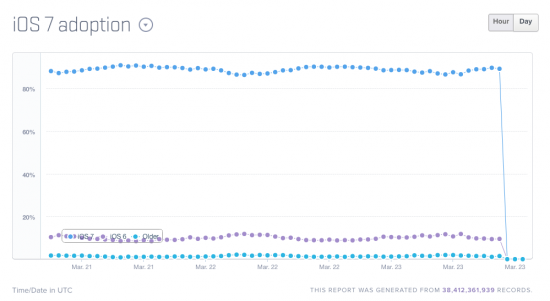 More recent reports reflect a lower figure – 85 percent, but that’s still not bad, is it? Here’s a visual breakdown of which iOS version Apple mobile users are on. 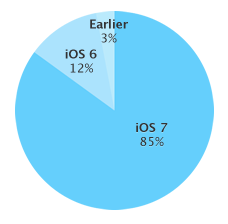 So how is Android faring in this regard? According to the stats, Android is lagging – way behind, with only 8 percent of devices running on KitKat (4.4) or higher. Not that this concerns any of us, right?

On another note, are you having battery issues with iOS 7.1? Here are some fixes you can try.