In the 80’s Apple Merchandise consisted of paperweights, notepads and... 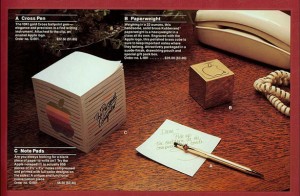 It’s always refreshing to see the past. The 80’s were a darling decade and I remember growing up to the days when computers were starting to go mainstream and IT products were trying their darn best to market themselves into the mainstream.

Open a box of any Apple product today and consider yourself lucky to have two white Apple stickers to label onto your car’s windshield. Not in the 80’s. Back then, in their pre “Think Different” campaign, Apple’s multicolored logo was seen everywhere — from pens, notepads, wall decor and even kites.

That was pretty much what Apple merchandise was in the 80’s during the “hiatus” of Steve Jobs before he came back to reintroduce the Mac. When Steve returned to Apple’s throne, his philosophy behind making every product perfect reinforced his philosophy to make people want an Apple product, that even without the marketing — the smoke and mirrors, they’d still lust over his products. And this is exactly what he did. By focusing on building devices that were products of envy, these served the dual purpose as the Apple merchandise and the product. 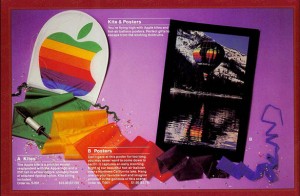 Looking into Apple’s history, it is quite interesting to see a very different company from more than 10 years hence. Case in point: Microsoft is still selling Windows. Apple is doing something completely different. But the geek in me wishes for a time back in Apple’s past when things were a lot simpler and it was easy for any fanboy to buy Apple schwag from anywhere.

Still, the design pegs for Apple’s ads don’t stray very far from the lifestyle overhaul that Apple Computers wanted to establish versus Microsoft that took to making things a little more geeky. 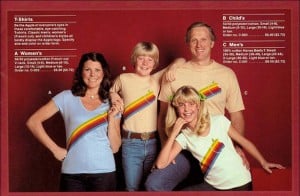 I definitely would have wanted one of these Apple rainbow shirts. Such a classic.

Today, there are only so very little and limited Apple merchandise being sold exclusively from the gift shop in Cupertino. In the book The Perfect Thing written by Steven Levy, he talks about how every item was personally inspected by Steve Jobs himself as he wanted to really keep the corporate identity sacrosanct.

The Apple today is a shade of its former self in the 80’s. They’re doing so much better but I can’t help but wish for Apple to open up once more and maybe just “let a few things through.” They need to lighten up.