How Rumors Can Burn You 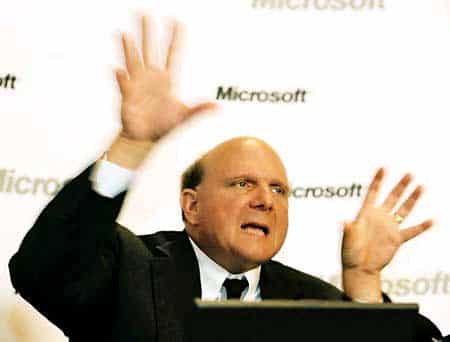 (Microsoft CEO Steve Ballmer, casting a spell over a crowd. They later all bought a Windows Mobile phone)

Back on Wednesday, there was a rumor floating around about WWDC. A very specific rumor mind you, down to the exact timing. It was reported by Tech Trader Daily, and it went like this:

Trip Chowdhry, an analyst with tiny Global Equities Research, contends that 7 minutes of the June 7 keynote by Apple CEO Steve Jobs has been blocked off for a presentation by Microsoft (MSFT) to talk about Visual Studio 2010, the companyâ€™s suite of development tools. Chowdhry says the new version of VS will allow developers to write native applications for the iPhone, iPad and Mac OS. And hereâ€™s the kicker: he thinks Microsoftâ€™s presentation could be given by none other than Microsoft CEO Steve Ballmer. (Or if not, at least Bob Muglia, who runs Microsoftâ€™s server and tools business.)

I wonder if Trip could be more specific.

This floated around the ‘net yesterday, and then this came up from Microsoft’s Twitter:

Steve Ballmer not speaking at Apple Dev Conf. Nor appearing on Dancing with the Stars. Nor riding in the Belmont. Just FYI.

Whoops. Tech Trader Daily updated their post and then added this new one:

Contrary to what he was claiming yesterday, Trip Chowdhry, of Global Equities Research, now says he was wrong, and that Microsoft (MSFT) CEO Steve Ballmer will NOT actually be at the Apple (AAPL) Worldwide Developers Conference. And he says there will NOT be an announcement from Microsoft at WWDC.

He nonetheless says his contacts â€œinsist that both MSFT and AAPL are working on development tools – probably our timing is off.â€

Don’t worry author Eric Savitz, I don’t blame you at all. You just reported what you found, you didn’t make the claim yourself. That is ultimately what I and so many other bloggers do; we report what we find, and don’t necessarily fact check our facts.

As a former copy editor, I don’t often publish something here unless it’s been corroborated on a few different sites. That doesn’t mean that it’s accurate, but it does mean that if I’m wrong, so is half the web. But rumors like this start to hurt your credibility. The next time Trip Chowdhry tells a crowd of reporters anything, I’m sure it will be discarded like an empty tube of toilet paper. I don’t want that to happen to me, or to Apple Gazette.

If it’s published here and I wrote it, chances are there’s some form of backup for my statements. If it’s pure conjecture, I’ll always say so, and if it’s a rumor, you’ll know that as well. Ultimately, I don’t want my name and Trip’s spoken in the same sentence.