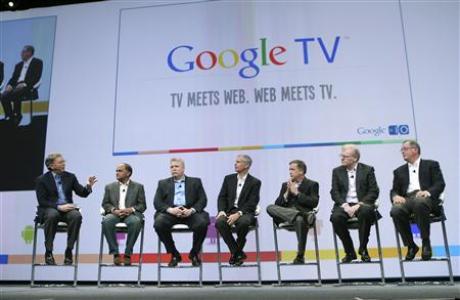 Google had their I/O conference last week, and one of their big reveals was the Google TV. The concept is to bring the web to your TV so that you can watch Hulu, YouTube, etc. Sounds exciting. But as with all things Apple, it’s now touted as an AppleTV killer. Here’s how the Washington Post put it:

Then there’s Google TV, its new software to connect the TV with the Web. When it ships this fall on Sony HDTVs and Blu-ray players and a Logitech set-top box, it should let you find things to watch — on cable, satellite or the Internet — with far more ease than traditional program guides.

Because it runs Google’s Chrome Web browser, with Flash included, it should play almost any online video (although sites such as the increasingly obstructionist Hulu could block Google TV). And because it’s Android underneath, it can run many Android apps.

Considering other firms’ clumsy or apathetic efforts — such as Apple’s neglected Apple TV — the market needs somebody to wake things up. Google could play the same constructively disruptive role here that it did in Web-mail.

I’m gonna tell you a little secret. You know what’s an AppleTV killer? Anything. The AppleTV isn’t a particularly fantastic product. I should know, I own one.

I buy and use Apple products because of their ease of use. I loved the AppleTV from the start, mostly because it allows me to watch movies on the big screen as they were intended. If I buy my movies on iTunes, then I want to see it somewhere other than my laptop. And in that respect, it works well. It streams all of my music from my iMac to the device then puts it on the screen. But I don’t use it for anything else, because that’s all its good for. The hard drive is too small to hold any decent sized library, and there’s nothing else you’d want to do with it other than use it for a Boxee device.

But this Google TV thing does nothing for me. I watch Hulu all the time, but I never have the urge to surf the net in my living room. Should I ever want to do that, I pull out the iPad. But checking out your favorite website is almost a personal experience, not shared well with multiple people. I have no reason to read with others nearby, so it defeats the purpose. It works for Hulu – assuming they’re cool with it – but what else makes it worth it? To me, it only makes sense if I’m getting a Google TV integrated into my regular cable box, thus reducing the amount of crap I have in the living room. Otherwise it’s just another box.

I’d buy it if it held any additional value to me, but it doesn’t. Is it an Apple TV killer? Sure. but it’s an easy fight to win.