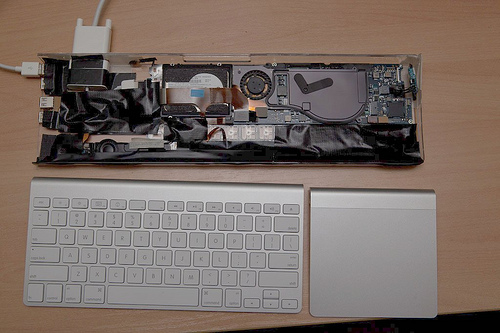 I’m a big fan of case mods. I’ve never done one myself, but I’ve always thought that it would be fun to do. That’s why when I see cool stuff like this online, I have to tell the world. It’s called the MacBook Air project, and let me have the builder explain it to you:

One day, I was gifted a busted up MacBook Air.

Now, ever since the Air was announce and Steve Jobs held up that tiny motherboard I’ve had an idea about installing one in a keyboard, specifically one of the old white Apple keyboards.

I’ll spare you the next few weeks of posts, and cut to the chase. Instead of using a wired USB keyboard, he decided to build a base and install a Bluetooth Wireless Keyboard and Magic Trackpad on top. This gives him a fully functioning computer, all underneath the keyboard.

It’s not pretty right now, but it’s still a work in progress. Ultimately, this is still a pretty cool idea, and one with a lot of potential. Were this based off a newer MacBook Air with a Mini DisplayPort connection, it could be even easier. I can’t wait to see the finished product.