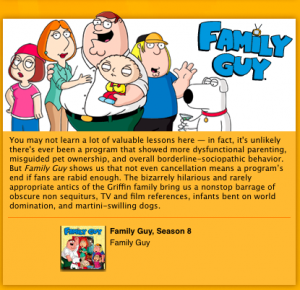 I have a strange relationship with TV.

When I was a kid, my parents limited my TV time to 2 hours a day. Once I moved out, I was watching everything I could, like some crazed TV vampire. Then I quit cold turkey and went with over-the-air broadcasting, which at the time meant just watching CBS for 2 years. Then I met my wife, we got DirectV, and we’ve had an up and down relationship with them ever since.

There are reports now that Apple is trying out $.99 TV shows. The goal is to put the new pricing tiers in place for the release of the iPad, making what’s assumed to be a huge product for Apple even bigger. Apparently the iPad was the big game changer, and even though the subscription thing didn’t work out for Apple – yet – this might.

I pay $85 a month for DirectV, and I only have one special package – Showtime – and I only watch that for Dexter. I do watch a lot of television, but I bet that all tolled, I wouldn’t have more than $50 a month in shows via iTunes. I would MUCH rather go that route and cut down my cable bill, and I think that Apple sees a lot of potential with that. Plus, then I get to keep my shows, which is a lot more appealing to me anyways. I know the cable companies don’t like it, but if they cared about me they’d keep their appointments. “Be home between 8 am and 9 pm” they say, then they show up four days later, drunk, and apologizing.