Battlefield Bad Company 2 on a MacBook 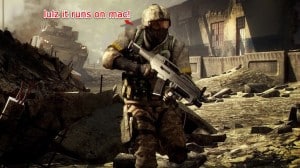 So I got access to the open beta yesterday. Bad Company 2 is one of the more highly anticipated multiplayer games, supposedly a “Modern Warfare 2 killer.” I was able to get my first impressions out and have successfully installed it on my VAIO CW gaming laptop. However I also took the liberty of seeing how Bad Company 2 runs on a Macbook and the results were surprising.

The short of it — it runs. At highest resolution, the game runs but as a shooter, you won’t be able to get decent work done. Your best best is playing at low resolution at 1024 x768, which is so 2006 if you ask me. But guess what? You will still barely get things done as well. Running around especially looks rather choppy and you will most probably get shot first if you’re on a standoff.

For comparison’s sake, the same specs run Modern Warfare 2 very decently, although we really can’t go on comparing both games as the engines are different. Not only are the maps bigger, but you have so much going on in Bad Company 2, I’m not surprised it chops. Falling trees, buildings getting obliterated .. you get the drift. None of these happen in MW2.

The short of it: So yes, it will run, but too choppy to seriously enjoy.

A caveat: we’re talking about running Bad Company 2 on its beta version so things might change when the actual retail copy comes out.