Battle Nations: Still playing it even if it has a... 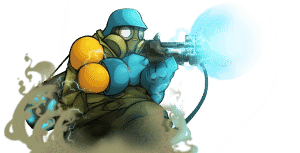 There’s a relatively new game out on the iTunes store and that’s Battle Nations. From the title description it seemed like a hex based strategy game similar to Advanced Wars or Final Fantasy Tactics. A free download later, I was mistaken.

Battle Nations is a premium quality game for the iOS that combines the incessant grinding we loved and hated with Zynga’s Farmville and adds strategic battle scenarios.

The game’s narrative is played out pretty well with stylized art and witty catch phrases that add subtle humor to a game that’s quite epic for what it is. The game itself consists of two main components — the resources and construction scenario and the battle scenario. You will spend most of your time building homes, gathering resources, planting crops and training soldiers allowing you to expand and explore the region.

As you build your base and explore the horizon, you will encounter hostiles known as “Raiders” that will to infiltrate your own base as well as bases of “friends” in the game. In the early stages you will need to defend a certain Sheriff Colt from Raiders. As you progress, the story actually does get more interesting allowing you to level up and unlock more items for purchase.

Following the Zynga formula, the more advanced unlocks take longer to build and yield more resources yet take a whole chunk of time to refresh. Thankfully, your regular regimen of soldiers don’t take as long to train. You can of course fast forward this to allow your Imperial Army to grow faster, but it will cost you an in-app purchase. You probably figured that out by now.

Battle Nations is definitely one of my iPad must-haves. It’s pretty good. Too good. Too good to the point that you wish that the devs didn’t include the grinding concept and stuck to the strategy element because the game works well that way too. I understand that there’s a business model involved and Z2Live really needs to make a profit first. But after a while I did feel bummed with all the waiting when I would rather have my army out killing Raiders.