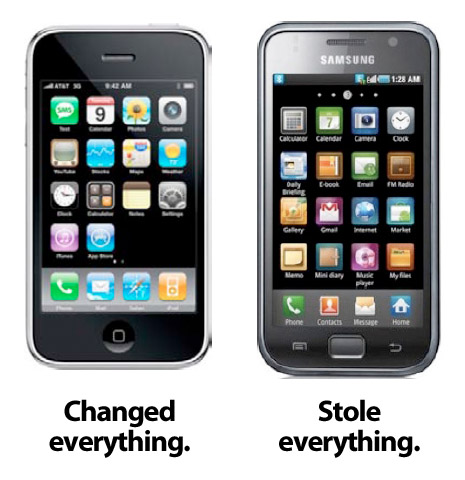 After just three days of deliberating over one of the biggest patent trials in judicial history, Apple tonight was awarded a huge victory over longtime rival Samsung.

It’s not like Apple needs Samsung’s money. A billion bucks is nothing to sneeze at, but this case was never about money for Apple. (That said, it’s worth noting that Apple’s stock reached an all time high this evening after the verdict was read.) It was about proving that Apple’s patent claims could be defended in court. And in much simpler terms, Apple believed that their “revolutionary” products — namely, the iPhone and iPad — were outright copied by Samsung, and that that just plain wasn’t right.

While not every one of Apple’s patent claims was upheld by the jury, most were. Samsung, on the other hand, had no claims upheld. Not a single one. It’s not a perfect victory for Apple, but in a patent case so incredibly complex, it’s a shockingly decisive one. The jury essentially stated that most of Samsung’s patent violations were copied intentionally. The potential ramifications here are vast, affecting much more than Samsung.

For its part, Samsung will certainly appeal this jury’s rulings, but that takes nothing away from Apple’s moment of victory. Apple can now file injunctions against any and all Samsung devices that were ruled to have violated Apple’s patents, ultimately leading to those devices being taken off the market for good. (Users who already own the infringing devices will, of course, keep them.) User interface elements of Samsung’s Android-based devices that are too iOS-like will have to be changed. Samsung’s sour post-verdict statement suggested that their loss in this case was “a loss for the American consumer.” But it seems to me to be just the opposite: instead of loads of smartphones and tablets that all look, feel, and behave exactly the same, forcing Samsung (and others) to innovate instead of imitate ought to lead to more diversity in consumer choice.

But other tech giants are paying close attention to the results of this trial, as well. Google has to be first and foremost on that list, since their Android OS played no small part in the software end of this whole thing. Most of Apple’s patents were upheld as valid, and that’s bad news for Google. You can be sure that Android isn’t going anywhere, but in the long run, this historic case could be the first step in Android becoming less like iOS. The differences between the two mobile operating systems could (and, I believe should) eventually be as profound as the aesthetic and behavioral differences between iOS and Windows Phone. Apple’s biggest beef with Android all along has been that it’s so strikingly similar to iOS. Those similarities have lessened with each new iteration of Android’s software, but they’re still there. And they don’t have to be. Microsoft has proven that a mobile operating system doesn’t have to look or work anything like Apple’s to be beautiful, usable, and commercially viable. (Microsoft could end up being the other winner in this trial, when all is said and done.)

With this big victory under its belt, Apple could set its patent infringement sights on other mobile device makers such as HTC, Motorola, and Sony Ericsson. Apple already has outstanding cases pending with several mobile device makers, and today’s events could encourage those defendants to settle out of court.

Apple issued the following statement about the trial after the verdict was read:

We are grateful to the jury for their service and for investing the time to listen to our story and we were thrilled to be able to finally tell it. The mountain of evidence presented during the trial showed that Samsung’s copying went far deeper than even we knew. The lawsuits between Apple and Samsung were about much more than patents or money. They were about values. At Apple, we value originality and innovation and pour our lives into making the best products on earth. We make these products to delight our customers, not for our competitors to flagrantly copy. We applaud the court for finding Samsung’s behavior willful and for sending a loud and clear message that stealing isn’t right.

I do believe that message has been and will be received by every major company in the technology business.

For Apple faithful like myself — and, I assume, you, dear reader — this is vindication. We’ve always believed that Apple makes better quality products than most other tech companies out there. Today, the United States judicial system effectively ratified our convictions.