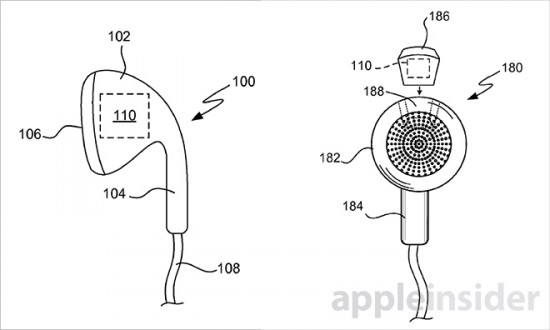 It won’t be normal if we don’t hear of at least one patent being granted to Apple in a week, right? Halfway through this week, we now hear about Apple getting approved for a biometric headphone system patent. Is Apple moving away from the smartwatch trend?

I highly doubt it, considering all that we’ve heard about the iWatch, its ever expanding team, and a whole lot of other rumors about the device and its health-related features. Where there’s smoke, there’s fire!

The biometric headphone system patent adds a new dimension of interest to what’s brewing, though. According to the patent, the system can track an array of details such as temperature, heart rate, and perspiration levels. The first two metrics make total sense – even the third, I suppose; it’s just that if I were to wear these headphones, its perspiration sensors would certainly go bonkers!

Seriously, though, the biometric headphone system seems to have a lot of potential, with accurate movement data also being targetted. This means it’s probably going to integrate more than one accelerometer.

With all the focus on fitness trackers in the form of wristbands and smartwatches, a headphone-based system is something that would stand out, especially since most people listen to music when running, jogging, walking, or doing whatever they do to get (or stay) fit. Yes or no?