Are 65-Inch Apple iTVs on Their Way?

Admit it. You’ve been wanting Apple to make its own TV set, just like the beautiful Samsung devices that have been sitting in many a living room around the world. There might be the baddest blood between Samsung and Apple, but even the staunchest Apple fan can’t deny that Samsung TVs do look nice. Now, can you imagine what Apple can do with this household device? 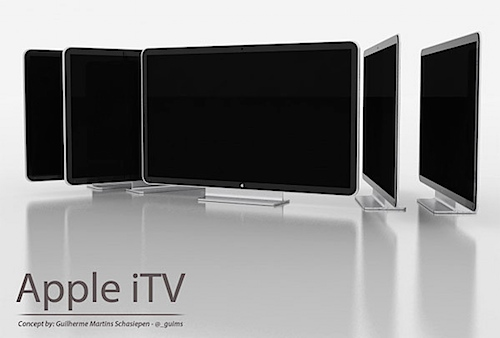 Talk about the Apple TV (not the box we currently have access to, but a “real” TV) has been floating around forever, but it seems that a South Korean display manufacturer is testing organic light emitting diode (OLED) panels for what may very well be called the Apple iTV. All 65 inches of it!

The report comes from The Korea Herald, which quotes Lee Seung-woo, who is an analyst at Seoul-based IBK Securities:

“The company is making 65-inch organic light-emitting diode sample panels for Apple’s iTV in collaboration with Apple. However, it is not certain whether Apple will use it for the mass production of its long-rumored iTV as it is still running tests.”

If this rumor is true, while we may not know when it Apple iTV will reach the market, it does make one think about purchasing a new Samsung TV this year or the next. And, with Apple sitting on a nice stash of cash, it might be totally possible that they are spending some money on exploring these OLED panels for an Apple iTV.

Apple enthusiasts and experts, what do you think of this rumor?