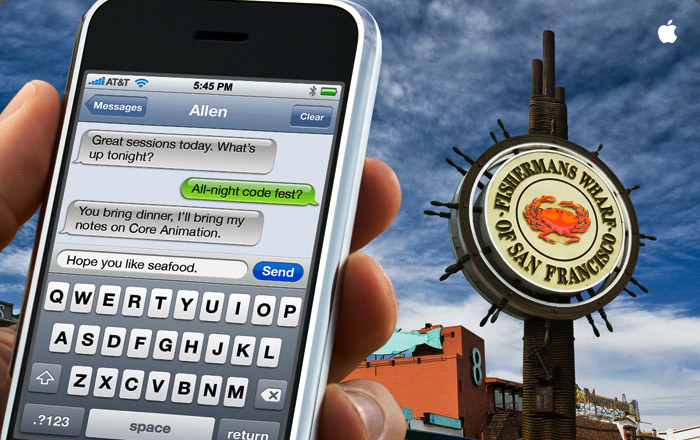 It’s that time of year again. With one week to go until the Steve Jobs WWDC 2008 Keynote, its time to sit back, muddle through all the rumor and speculation, and make a few predictions about what we’ll see at this year’s World Wide Developer’s Conference.

I know, I know – this isn’t so much a prediction as it is an inevitability. We all know that WWDC 2008 is centered around the iPhone, and all signs point to the 3G iPhone being announced there. One bit of speculation that I don’t think will be true, however, is the immediate release of the phone. I think we’ll all have to wait, at the very least, a few weeks before we’ll be able to get our hands on the new phone.

Why? Apple will get more press that way. If the 3G iPhone is announced next Monday for a release in a month or so – Apple will get major media press for the announcement, for the release, and possibly even for the droves of current iPhones that will end up on eBay immediately after the Keynote. It makes more sense, marketing wise, for Apple to wait to release the 3G iPhone – so I believe we’ll get the announcement – but not the actual phone.

I do think, however, that we will walk away from the Keynote with something next week. The iPhone 2.0 software release will, hopefully, be available for download next Monday, including the new iPhone App store, and maybe a few surprises as well.

This software release is the biggest one yet for Apple’s iPhone, and you can expect some system improvements, and hopefully some much sought after new features, like MMS messaging, and Copy and Paste.

To kick off the iPhone App store select 3rd parties will have Apps ready to go at launch including the iPhone AIM client, and maybe even a game or two from companies like Sega and EA. The App Store is going to need some strong content at the launch for it to really get the attention Apple hopes it will, and some highly sought after, and polished applications will go a long way in achieving that goal.

Another fairly safe prediction is the release of the first non-beta version of the iPhone SDK. I don’t expect much to change from the current Betas that are available now, but I’m sure we’ll get a look at everything you can do with the iPhone SDK.

Oh, and one more thing….

I know you want it. I know. This is the new “true video iPod” that will be talked about and rumored at every Keynote for the next few years. I agree that this Keynote would be a perfect time for it to launch – if it was going to anytime in the near future…but it’s not going to happen. Not yet, anyway.

So – what do you think? Do you agree? Disagree? Sound off in the comments below.