Will They or Won’t They: Opera Announces Opera Mini for... 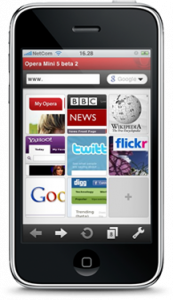 Well, it was bound to happen, and now here it is. Opera is attempting to get Opera Mini out onto the iPhone. Visitors to the 2010 Mobile World Congress got a chance to check it out the other day, and apparently, Apple is onboard. How do I know this? Here’s a little timeline.

Opera Software, maker of the worldâ€™s most popular mobile Web browser, plans to reveal Opera Mini for iPhone in an exclusive press and partner preview during the 2010 Mobile World Congress (MWC). Visit Operaâ€™s exhibit in Hall 1, C44, to witness a new way to surf the Web on the iPhone â€” an experience that Opera promises will be fast, easy to use, and packed with favorite Opera features.

Then there’s this blog post from Monday on the Opera Blog Behind the Trenches:

AT&T would be wise to use whatever power it has over Apple to convince them to allow Opera Mini onto the iPhone App Store.

Not only will AT&T’s customers have a much better experience when they don’t have a perfect WiFi or 3G connection, but Opera Mini also compresses data up to 90%. This means that AT&T could get much more out of its current network infrastructure.

Now after that, we have this post. I picture the author wringing his tie and wiping the sweat from his brow as he wrote it:

My previous blog post asking for AT&T to “nudge” Apple into accepting Opera onto the iPhone was apparently published a bit prematurely!

Now it looks like beating the drum about Opera Mini for the iPhone actually worked.

According to Norwegian IT site Digi, Apple gave Opera a call (Norwegian) after the announcement. They seemed to have noticed the massive attention around the announcement, and now wanted to offer their cooperation.

If what the article says is true, then that is certainly good news for iPhone owners. It’s also an encouraging sign to see Apple being willing to work with other companies to bring their users and customers a wider range of App Store applications.

Somebody might have gotten in trouble over that one.

Personally, I’d love to see another browser on the iPhone. I’m sure Mozilla’s working on Firefox, and getting Opera in there would be great as well. I’ve never been a fan of Opera – although I’ve installed it three times now just to try – but the more the merrier as far as I’m concerned. The big question though, is will Apple approve it? They could easily make the claim that it’s duplicating functionality, just like e-mail apps do that get rejected. Only time will tell, but I’m optimistic.