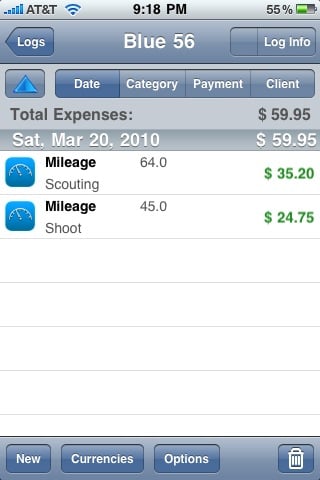 As you may or may not know (or care, frankly), I run my own business. 2010 is going to be my first full year as a self-employed person, so I’ve learning all sorts of great things about taxes. One of them deals with mileage, or more specifically, recording it. I met with my accountant the other day, and he chastised me for only notating some of my mileage. “With as much as you drive, you could have twice the expenses, and that’s a huge write off,” he said. And he was right, I just wasn’t up to snuff.

So this year, I decided to make a change. I went right out and bought XpenseTracker, an app for the iPhone which can track all of your expenses, then export them to a .CSV file for use in Excel or Numbers. Now right off the bat, this probably seems like the most boring app ever. And ultimately, it’s no Grand Theft Auto or anything, because it is just about numbers. Until you see how much you’ll save.

Last year, for every mile you drove you could get .55 cents back from the government on your taxes. Once I started tracking my mileage, I instantly got hooked. Above is just one trip I had for a photo shoot this past weekend. That’s almost $60 towards next year, and that’s only one trip. It’s gotten addictive, frankly, to the point where I’ve been debating putting this app on my coveted front page just so I remember to use it more often.

The real kicker though is one that I haven’t tried out yet. Apparently you can buy OCR recognition (assuming you have a 3GS, anyways) so you can take a picture of your receipt, then have the program automatically plug in the information into the database. How cool is that?