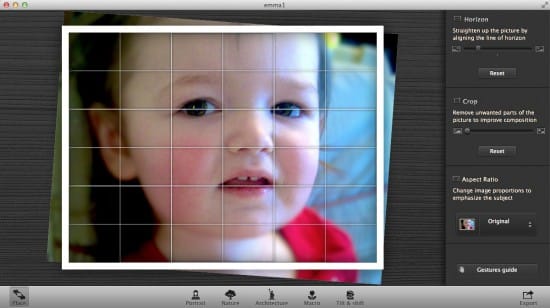 Selective focus — pictures that have areas blurred out — with is all the rage with photographers. Focus is a neat little app for the Mac that makes it quick and easy to apply selective focus effects to any picture, along with a few other photography tweaks.

Selective focus is a commonly used tool these days that gives your eyes a specific area of an image to focus on. When implemented properly, it’s a subtle but powerful way of getting the viewer to zero-in on what you want your photo to be about. Take the image of my son at the bottom of this page, where he’s standing at the back of a caboose. The original image shows a small boy contrasted against the size of the big, red train car. But the second photo is cropped and blurred so that instead you notice my son’s reaction to where he’s standing more than you notice the caboose.

Focus makes this process exceptionally easy. It uses gestures and click-and-drag effects to let you select the area you want to have the optimal focus, and then guide lines show the areas where blur will be applied. You can adjust these lines by dragging, and Focus‘ best feature might just be how it seamlessly shows in real time how the blur effects look on your pictures. There’s a circular filter that you can expand and contract the size of, or there are filters that use lines, which you can set vertical, horizontal, or tilt to the exact angle you want. 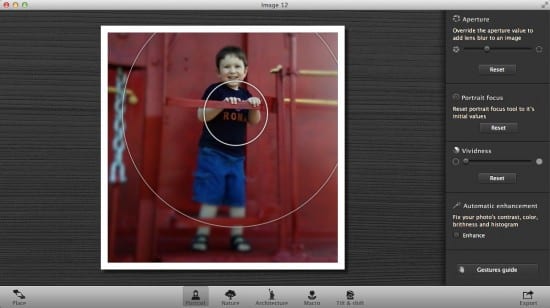 Everything about Focus is made to be easy enough for photography novices to use, but powerful enough for professionals. For example, unlike other photo editing tools, there are no measurement values shown on any of the effects sliders. In other words, Focus doesn’t tell you when you’re using a filter at say 10% strength or 50% strength or what have you. It just shows a blank slider, eliminating numbers from your end of the equation so you can edit your pictures in a more instinctual way, settling on simply whatever looks best to you.

In addition to selective focus, the app also gives you the power to easily straighten an image that’s off-kilter, and/or crop your pics with simple lines. There are presets for common aspect ratios that you can use, and there’s also a slider that lets you adjust how vivid the color saturation is. There’s also an override for the amount of preset blur that’s used — allowing you to increase or decrease the amount of blurring. You can even use OS X Lion’s gesture effects like pinch-to-zoom in your editing. A recently added feature automatically defaults the focus area on your image using facial recognition, which drastically simplifies the process even further.

The $9.99 price feels a bit steep for an app that does just a handful of very specific photo editing effects, and it’s the only facet of the app that gives me any sort of pause. There are plenty of apps for both Mac and iOS that can do the things that Focus can do — and many of them cost less. But what Focus does, it does exceedingly well, with intuitive simplicity and elegance. Developer Coppertino is adding new features regularly at no added cost, which will only increase its value over time. If selective focusing is what you’re primarily interested in doing with your pictures, you won’t find a better way of doing it. (Check out some of my own before and after images edited with Focus below.)