by Alexander Fox 5 years ago8 months ago
2
The sudo command, short for “superuser do,” is the most powerful command prefix you can use in Terminal. It elevates your account privileges temporarily, allowing you to run commands that would typically be prohibited. With this power, you can do serious damage to your system if you’re not careful. Always exercise due caution before using sudo, and make sure you know exactly what will happen when you press Enter. 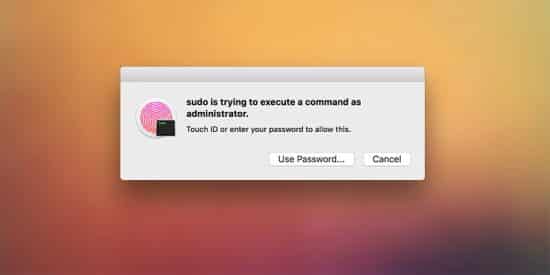 With a little bit of text file editing, we can access and edit the list of acceptable authentication methods for sudo. By adding a line of text, we’ll make Touch ID an acceptable method of authenticating sudo commands.

There is one potential downside to setting up this command. If you authenticate sudo commands with Touch ID, you might not be able to authenticate sudo over secure shell, or SSH. There’s talk about this getting fixed in a forthcoming version of macOS, maybe in an upcoming beta. If you use SSH frequently, make sure you test this functionality before you need it in a critical situation. For now, if you encounter that problem or bug, you’ll need to roll back the change by removing the text you added.

1. Open Terminal (found in “/Applications/Utilities”) and run the following command:

2. Create a new line underneath the line beginning with “#sudo” by pressing the down arrow key, then the Return key. 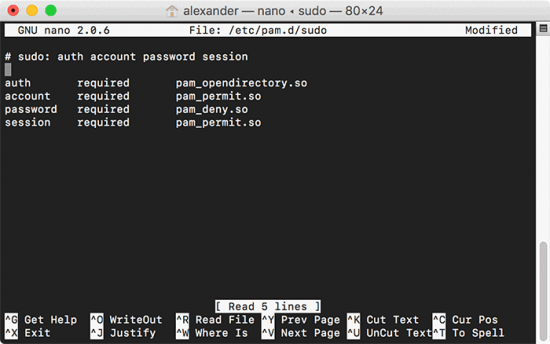 3. On the new line you just created, paste the following text:

You may notice that this text contains some spacing so it lines up cleanly with the existing entries. This isn’t strictly necessary, but it makes things easy to keep track of.

4. Press Ctrl + O and Enter to save the updated document.

6. The next time you need sudo, you’ll see the standard system dialog box prompting for the input. If it authenticates directly, you’ll have access to sudo. 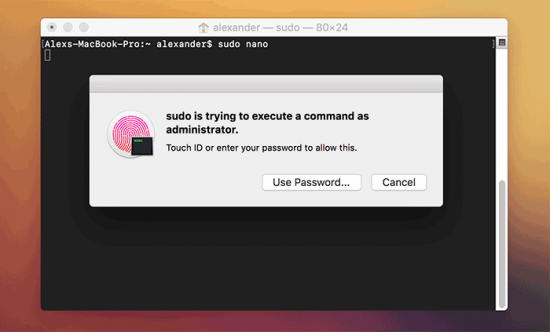 Once you’ve entered your password for sudo, you won’t have to re-enter it again for the remainder of the Terminal session. If you find this insecure and prefer to enter your password every time sudo is invoked, you can adjust the sudo password timeout to be more secure.

1. In Terminal, run the following command:

This command will open visudo, which allows you to edit the sudoers file. 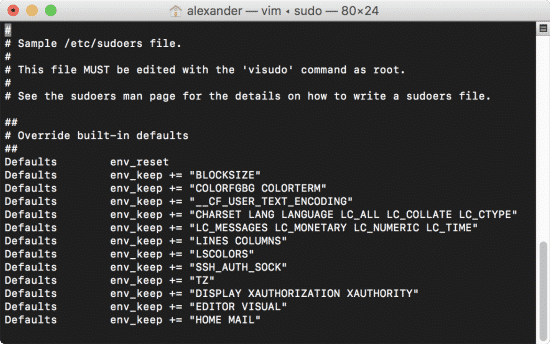 This is another text file which contains many of the preferences for sudo are stored and edited.

Note: you might have realized that you’re in vim at this point. If you don’t know how to use vim, it can be a little confusing. Follow the instructions below exactly.

2. Press “Shift-G” to navigate to the end of the document. 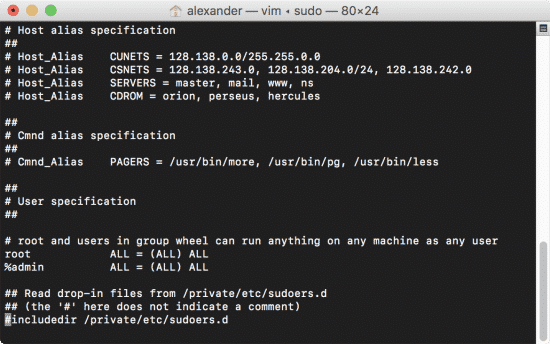 3. Press the “A” key to enter append text mode in vim. You’ll see the text “– INSERT –” appear at the bottom of the window. 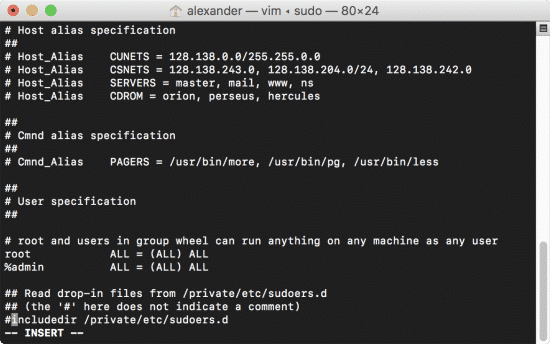 4. Create a newline at the bottom of the document by using the arrow keys to navigate to the end of the last line and pressing the “Enter” key.

5. Type in the following line. Normal copy and past commands don’t work in vim, so you’ll need to type it exactly as it appears: 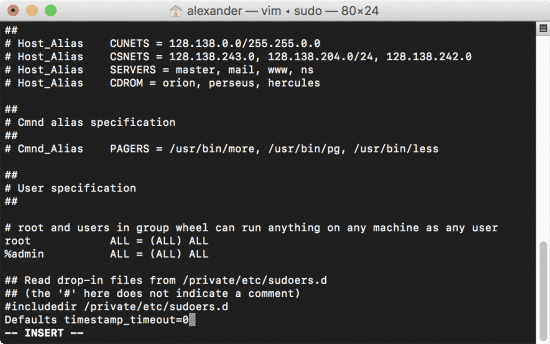 This will set your sudo timeout to zero seconds, meaning that you’ll have a zero second grace period between when you execute a sudo command and when you must re-enter your password.

You can also set the timeout to -1, which gives you an infinite grace period.You should never do this: it means you’ll never have a prompt to confirm sudo. Use sudo incorrectly once, and you have a very real possibility of nuking your system.

You can also extend the timeout period to a longer interval (perhaps five seconds) if you’d like some grace period, but not as much as the default. 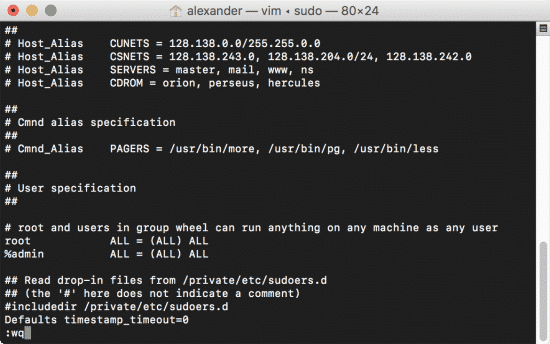 This will close and save the document, returning you to the command prompt. Refresh the Terminal, and you’ll find that your new sudo preferences are operational.

Tweaking sudo can be a helpful way to make your Terminal run more like you’d prefer. If you have a complex password, replacing the prompt with Touch ID can save you time and annoyance. You’ll still have the option to enter your password manually with the “Use Password…” button. Changing your sudo timeout can make your system more secure, especially if you regularly run potentially dangerous system modifications through Terminal.

Getting Started with Terminal: What is sed and how does it work?