New MacBooks Pros coming February 24th but what are the...

by Tanner Godarzi 12 years ago10 months ago
2 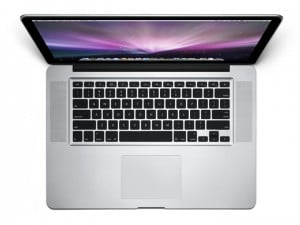 Apple is set to announce new MacBook Pros next week according to several sources but aside from the obvious processor and graphics updates, not much else is known about the refresh.

According to MacRumors, Apple is scheduling its MacBook Pro refresh for February 24th.

MacBook Pro stock has been dwindling internationally and this morning two Italian sites listed give new MacBook Pro part numbers (MC720, MC721, MC723, MC724, and MC725) that are said to represent the new updates. The new machines are said to be making their way to Italian resellers towards the end of the month with a released date of Thursday or Friday.

The more obvious upgrade to the MacBook Pro line is the move to Intel’s newest CPU architecture called Sandybridge. Sandybridge is a smaller 32 nanometer CPU bringing improved energy efficiency and paves the way for a quad core MacBook Pro. However, Apple was forced to push back its MacBook Pro refresh due to a defect Intel found in its Sandybridge chipset. The flaw would have degraded performance on some SATA connectors. Despite the delay, Apple was only set back slightly.

Apple is expected to include Intel’s competitor to USB 3.0 dubbed Light Peak in this coming MacBook Pro refresh. According to CNet the newest MacBook Pros will use Light Peak but under a different name.

Apple is expected to adopt this technology in the near future–but likely use a name other than Light Peak, a source familiar with this aspect of Apple’s plans said. Intel has said in the past that the first products using Light Peak should appear in the first half of 2011.

Apple has been working closely with Intel on Light Peak for the past two years which explains the absence of USB 3.0 from all current Macs. Light Peak uses an optical signal instead of an electrical current to deliver data at up to 10Gbps or at least twice as fast as USB 3.0

Higher resolution displays are all the rage lately as the iPad 2 was rumored to receive a Retina Display (suspension of disbelief sold separately). During October’s MacBook Air refresh Apple upgraded the 13-inch Air’s display to a resolution higher than the baseline MacBook Pro – 1,440 x 900. The current 13-inch MacBook and MacBook Pro have a lower resolution display of 1,200 x 800 which is 89,088 pixels short of the 11-inch MacBook Air’s 1366 x 768 16:9 display.