Getting Acquainted with the New Mojave Screenshot Tool

The buttons on the toolbar perform the following actions, from left to right:

To start a video, select either of the two record options and press the “Record” button in the toolbar. To stop the recording, press the Stop button in the Touch Bar (if applicable) or in the menu bar.

Capturing a screenshot or screen recording will create a floating thumbnail in the lower-right corner of your screen. If you click on this thumbnail, you’ll have the opportunity to annotate or edit your screenshot before saving. You can read more about annotation further down.

Click on the “Options” menu in the toolbar to reveal more options. 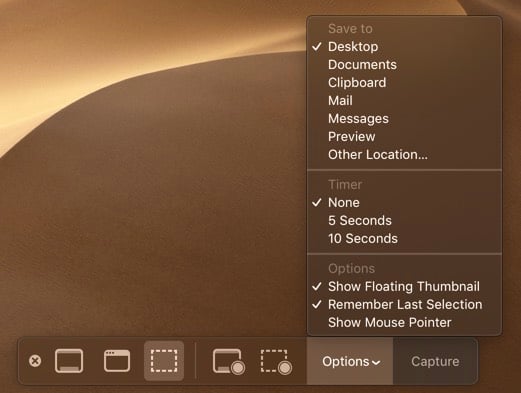 The timer functions as expected. There are presets for none, which captures the screenshot immediately. Five and ten seconds makes you wait that many seconds before capturing the screenshot.

At the bottom, we have miscellaneous options. “Show Floating Thumbnail” controls the post-capture behavior. Keep the option checked, and macOS will display a temporary thumbnail after capture and before saving to disk. “Remember last selection” saves the region selection box used last, allowing for easier repeatable screen captures. For example, if you’re capturing the same window repeatedly, repeating the capture region is perfect. “Show mouse pointer” controls whether or not your cursor appears in the screenshot.

Once you’ve set your settings as desired, click the “Capture” button on the far right of the toolbar to capture a screenshot.

Once the screenshots are captured, they will appear as a small floating thumbnail by default. This thumbnail will float in the corner of your screen for several seconds before disappearing. If you click on this thumbnail, you’ll open the screenshot in the Markup window. 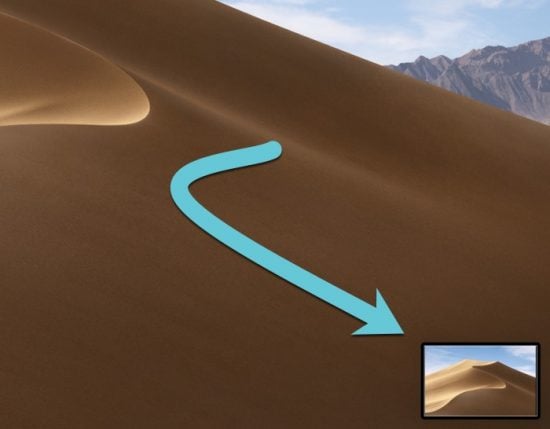 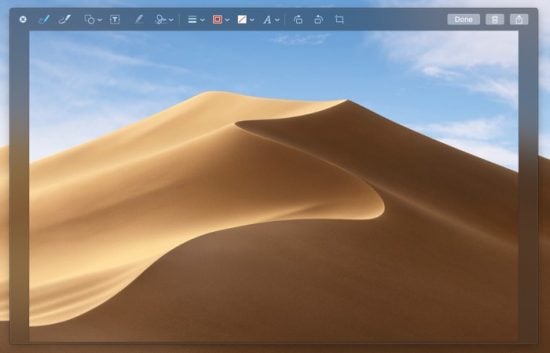 In the Markup window, you can use all of the annotation tools from Preview on your images, including arrows, shapes, text, and signatures. It’s not an incredibly broad range of tools, but it covers the most common use cases.

When finished, click the “Done” button to save the screenshot to the location chosen in Options before capture. The trash can icon will delete the screenshot, and the sharing icon provides options for exporting to other apps. Once you share the screenshot through the share sheet, it’s safe to delete it. 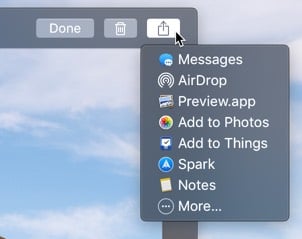 Screen recordings also appear as thumbnails, but the regular markup tools can’t be applied to videos. Instead, clicking on the thumbnail will reveal an edit HUD, allowing you to trim the clip with the button next to Done.

Unlock the Power of macOS’s Preview