Filed Under Funny: Cracked Magazine’s 5 Reasons You Should be... 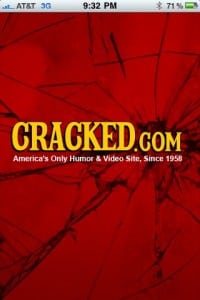 I did a little bit of stand-up about 5 years ago. For a year or so, I did some local gigs, performed at some horrible bars, and never got paid for a bit of it. I had a bunch of fun, but I decided I’d rather be snarky in print or online instead.

Cracked has a soft spot in my heart. I used to pick up Mad Magazine as a kid, and occasionally, Cracked would find its way into my hands as well. Most people I knew considered it the red-headed stepchild of Mad, but I liked it. And now that it’s online, it’s even funnier, with new lists almost daily. One of their most recent ones touches on Apple fanboys with, 5 Reasons you should be scared of Apple. My favorite:

Apple Versus Absolutely Everyone: The Masterplan

“Apple can further determine whether a user pays attention to the advertisement. The determination can include performing, while the advertisement is presented, an operation that urges the user to respond; and detecting whether the user responds to the performed operation. If the response is inappropriate or nonexistent, the system will go into lock down mode in some form or other until the user complies. In the case of an iPod, the sound could be disconnected rendering it useless until compliance is met. For the iPhone, no calls will be able to be made or received.”

The site is a bit NSFW, but it’s funny as hell, and worth a few time-wasting minutes online. But better yet, now they have an iPhone App [iTunes link]. For just .99 cents, you can visit cracked online whenever you want. Sure, maybe they’re a bit afraid of the big A, but not afraid enough to stay away from the App store.