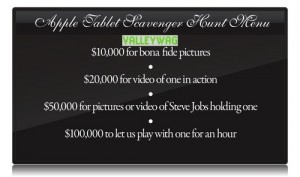 Well now this is interesting.

Valleywag has announced that they’re tired of the b.s. rumors, and they just want to see the new Apple Unicorn Tablet. So bad, they’re willing to put their money where their mouth is. From the site:

Apple has said absolutely nothing about its tablet, but everyone expects it to be unveiled in San Francisco on Jan. 27. So, that gives you to two weeks to play in Valleywag’s Apple Tablet Scavenger Hunt: If you can find the first genuine photos, video or â€” the holy grail â€” the actual messiah machine itself before then and they’re exclusive to us, we’ll give you a cash prize. We’ve even drawn up the helpful menu above.

At the bare minimum, you’re looking at $10gs for pics, then $100,000 large if you can let them touch the device itself for an hour. The interesting part about this is seeing if anyone actually comes up with it, and if so, what Apple does about it. I smell lawsuits in the future.