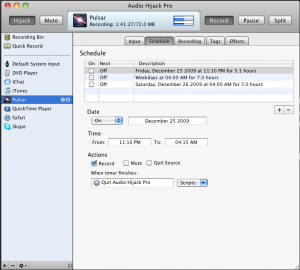 Last week I talked about Pulsar, a program that lets you listen to satellite radio via your desktop, without having to log into a clunky web interface. Turns out that Rogue Amoeba makes a lot of products, including Audio Hijack Pro, so I sent off an e-mail, and they sent me a free license so I could review the program.

I was pretty excited to receive this license, but mostly for selfish reasons. As I said before, I’m a fan of Howard Stern, and around Christmas time every year, they do a special called The History of Howard Stern, where they play old tapes from the length of Howard’s career. It’s hilarious stuff, and I look forward to it. Problem was, I wanted to record it so I could listen to it later, that way I would never miss a section, and I’d always have it on hand. When I found out that there was a way to record the output from Pulsar, I knew it was the answer to my problem. I just needed to get it working. Setting up Audio Hijack Pro is pretty easy. You pick what media you want to hijack – default system input, iChat, DVD Player, Pulsar, iTunes, QuickTime Player, Safari or Skype – and press the “Hijack” button. Almost instantly the equalizer starts bouncing around back and forth. Then you press the record button, and the process begins. You can pause the recording for a commercial, split it into different tracks, or mute it for one reason or another.

But even better, this application can be scheduled. Let’s say I wanted to record a show daily at say, 4 am, for 6 hours. I could program it into Audio Hijack Pro pretty easily, and then it automatically turns on and off when I schedule it.

Once you’re done with the recording, you can send it off to your favorite music editor, burn to a CD, or just right to iTunes.

So how well does it work?

First off, it does its function well. It does hijack the audio you want, no matter what the source, and records it locally. The problems come after that. Let’s face it; If you record audio, chances are, you’re going to need to edit that audio at some point just to fine tune it. Maybe you need to remove that first second of recording, or just take out a commercial in the middle. The obvious fix here is to use a program like Garageband to edit the track, but no matter how I tweaked it, I couldn’t open the files in Garageband. That means that there’s no real way for me to edit the songs, which is more than a little bit frustrating.

There is a fix, though, and Rogue Amoeba sells that as well. It’s called Fission, and it sells for $32. I didn’t have a chance to review the program, because they didn’t send me a copy.

Now here’s the thing: Without Fission, Audio Hijack Pro really is just half an application. You get the audio you need, but no way to tweak it, so the resulting recordings are akin to mix tapes from the late ’80s.

There’s another problem here, too. Scheduling recordings is nice, but to do that, you have to leave the program you’re hijacking from on and running, as well as Audio Hijack. And while it’s sitting there waiting, it won’t let the computer go to sleep, or even kick in a screensaver. So whatever you have on your desktop is left to sit there, burning away on your monitor. Now I know that most modern screens don’t have a huge burn-in problem, but if you have your computer nearby and it flips on in the middle of the night to record, that can be a little weird. Plus, it won’t sleep or turn on the screensaver anytime it’s recording a scheduled program, so you’re left to deal with it. In my case, trying to record something at 4 am every day, that means that my computer would be on, running, and working, while I was a asleep, but all the monitors would be on as well. Sure, I could adjust the brightness while I’m out, but is that really the best option? Maybe allowing the screensaver to work is the best fix, but who knows if that’s even a possibility.

Ultimately, Audio Hijack is a great product, but it needs its companion programs to really shine. It almost feels like you’re getting iTunes without the movies, or Address Book without the phone numbers. To really do the job right, you need to cough up the extra cash and buy Fission at the same time, otherwise you may find the program to be a bit lacking. And for $32 by itself, that can be a bit frustrating. I’d recommend the program if you buy the bundle, but on its own, I’m just not sure its worth the money.