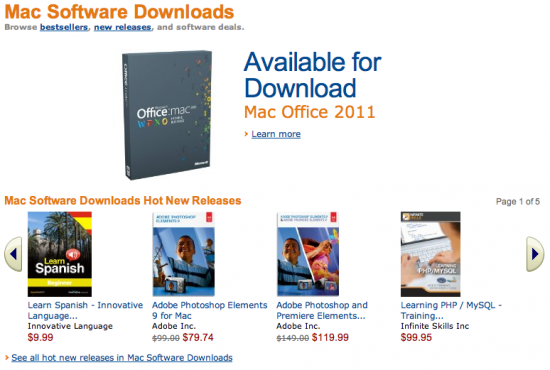 iOS apps are Apple’s big moneymaker. Yet it’s a completely closed system; you can only fill your iOS device with apps from the iTunes App Store. You can’t go to any other website or store and buy apps for your iPhone or iPad. Can you just imagine how much other retailers out there wish they could get in on the “app selling” business for iOS?

In the meantime, Amazon has done the next best thing: they’ve launched their own Mac App Store. Apple’s Mac App Store has proven popular among OS X Snow Leopard owners, making it easy to buy programs and install them instantly, all from a single, integrated interface. But Macs aren’t closed to external program installations, so there’s no reason other retailers can’t sell downloadable Mac apps.

Amazon’s Mac App store is starting small — at the time of this writing, its non-game apps consist of a paltry 200 titles, most of which appear to be “learn a foreign language” programs. (Downloadable Mac games are available in a separate store.) But there are a few items there you can’t find in the official Mac App Store, such as Office for Mac. And Amazon is running a special $5 off deal on your first purchase between now and June 1st.

So far, I’m not terribly impressed. But if Amazon can run some terrific deals that undercut Apple’s prices, then a little healthy competition could be a very good thing.