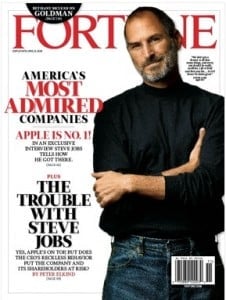 A few days ago, I wrote a post about Apple’s quarterly earnings call. I’ve been thinking a lot about that big number – $40 billion – and what it really means for Apple. I think the truly telling part about it though I already put in that first post.

Jobs said that the money provides enables Apple to â€œthink bigâ€ in terms of its product development, says Reuters, suggesting that the company has no immediate plans to offer a share buyback or pay a dividend.

â€œWe want to take risks, technical risks,â€ he said, according to CNBC.â€We want to know the ground is still beneath us when we jump.â€

Let’s take a minute to really think about what that means.

The iPad is coming out soon, either this month or next, and by all accounts it’s going to make money hand over fist. But let’s say that hypothetically it doesn’t. The iPad is a huge flop, and Apple loses millions, if not billions in the proposition. What does that really mean?

If Apple lost $10 billion tomorrow, they would be $30 billion in the black. It wouldn’t be seen as a positive to lose that much money of course, but it also doesn’t mean they’d go bankrupt. Compare that to another company, and a $10 billion failure could decimate the business. Hell, $1 million could kill a lot of small firms out there, including a few start ups. But for Apple, this isn’t a big deal – not in the same sense. They can take these risks on products that the critics mock and consumers waffle over because if the product fails, it’s not going to kill them.

Which is a much different perspective than at most places. I’ve got a friend of mine who’s a software developer, mostly coding in Adobe products. He spent a year working on this great medical software program, working day and night without pay, then hits a wall right before the finish line. If this software doesn’t pan out, he’s out of business, and back on the open market. Think about how that makes him react to changes in the marketplace. He has to move with them, instead of starting the movement.

Not so at Apple. Everyone in the industry knew the iPad was coming, but no one was sure what it was. So everyone came out with their own Windows tablets, touting how great they are even though they were the same crappy computers released in 2000 but now with Windows 7. Apple comes out with the iPad and shocks the world. Some people think it’s going to fail miserably, others think it’s going to change the world. But that’s the point – they can lead the charge for these new technologies and take risks because they have the cash to back it up.Apple starts the wave, while everyone else is running out to grab their surfboards.

This is just the start, too. I’ve read a lot of rumors recently about Apple becoming a gaming company. Don’t think it could happen? It already has according to some, with major companies such as Rockstar Games and EA hopping on with the iPhone and soon the iPad. Imagine if Apple put out a console tomorrow, integrating the features of the AppleTV with the games from the App Store and working it all on the big screen. Or maybe they take the App Store full size and come up with the iGame store, full of console titles ready for their new system. Think it would fail? It might. Nintendo and Microsoft have a pretty solid lock in that field. If they do fail, they lose billions, and if they succeed, they stand to make billions as well. But no matter what happens, they’re not going to lose the keys to the front door because they’ve got it covered and then some. It’s the worst recession since the Great Depression and no one at Apple is worried about corporate layoffs or 10% pay cuts. THAT is impressive.

So what’s next? Gaming console? Flat screen TVs? Home media integration? Automotive systems? Living room furniture? Who knows, other than Steve Jobs. Whatever they come up with though is going to be really out there and daring, and will polarize the industry. I can’t wait to see what it is.