You are here: Home / Lifestyle / Watched By Steve 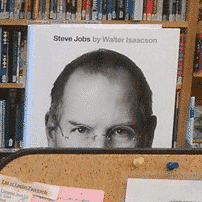 Can you spot Steve? He's watching you...

Ever get the feeling you’re being watched by someone? At Bookshop Santa Cruz, that someone is Steve Jobs. The Walter Isaacson biography keeps popping up in unexpected places all over the store, spying on patrons and employees.

It’s all part of the fun of Watched By Steve, a Tumblr photo blog started by Kat Bailey and Nici McCown, owners of Bookshop Santa Cruz. Bailey and McCown say they mean no disrespect to Mr. Jobs, they’re just having fun with the minimalistic cover of the bestselling book (which I still think should have been titled iSteve; who’s with me?).

Part of the blog’s charm is browsing through the photos and trying to spot the late Apple CEO. Sometimes the book gets prominent placement, but more often than not, you have to hunt for it. Every time, you’ll find it stuck in some cheeky spot where it seems to be peeking out from behind something, discretely spying on people in the store.

Here are a few examples of photos from the blog, but head over to it to see lots more.