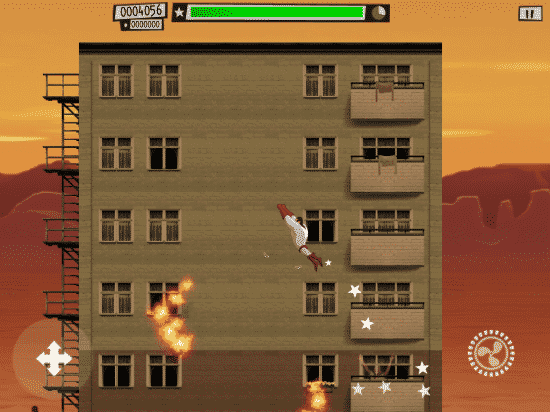 As a side-scroller with quirky characters, a low price, and cute, Incredibles-ish graphics, The Hero HD has the potential to be a great game. Unfortunately, that potential is squandered.

The concept behind The Hero is solid. You play a generic superhero who’s sent on missions around the globe to stop bad guys and save the innocent. Your initial mission selection screen is presented as a planet, which you rotate to get to the city or landmark where the next level takes place. Inside each level, you’ll receive your orders from an overworked policeman and his typically buxom assistant. From there, you guide the superhero around the side-scrolling game world, looking for targets to destroy and civilians to protect. 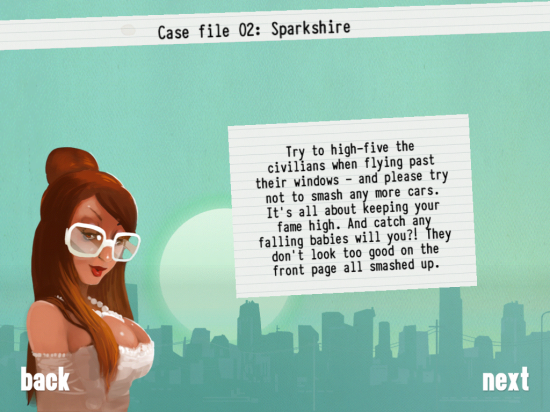 Whether you’re taking down bad guys, disarming bombs, or catching falling babies (which are inexplicably attached to tiny parachutes), your one action in the game is to run into your targets. It never gets any more complicated than that. You just run into everything. There’s a certain strategy involved, because you have to do more than just stop the bad guys; you have to keep the public happy. That means swerving around vehicles so you don’t damage them, and responding to civvies in danger in a timely manner. Fail to do these things, and you’ll lose “fame.” This can ultimately end the game if your fame meter falls too low. 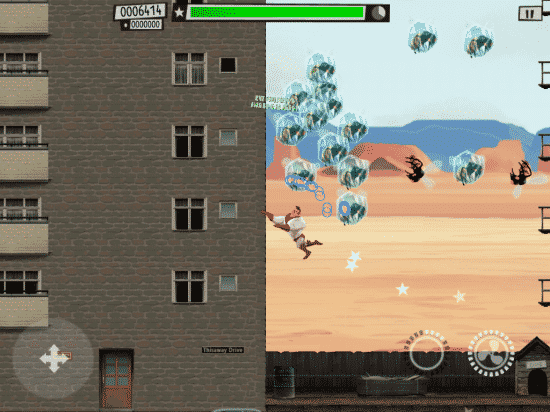 The Hero‘s problems can be summed up entirely by its clunky controls. The on-screen superhero has one speed and one speed only — a speed I found way too fast to have any sort of fine control over. This made for endlessly frustrating gameplay, where I kept having to double-back and try to line the fast-flying superhero up on the right flight path to hit whatever I was aiming for. More times than not, I had to repeat this process again and again before I could finally hit the target.

I like that the developers were thoughtful enough to offer players their choice of three different ways to control the on-screen superhero. You can use a virtual thumbstick, which of course has no tactile feedback and is visually blocked by your thumb, so you can never control the darn thing with any confidence.Â (Note to ALL iOS game developers: virtual buttonsÂ suck!) A second option lets you turn off touchscreen controls altogether and use the built-in accelerometer to tilt the iPad back and forth. Lastly, you can drag your finger around the screen, simply touching the direction you want the character to go.

But sadly, none of these control schemes offer the kind of fine control that the game needs, in order to be… well, playable. 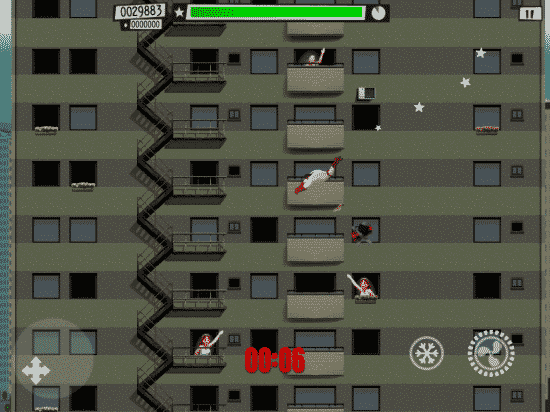 The gameplay is also mighty repetitive, never offering a single solution to any challenge presented to the superhero beyond simply running into it. There are a few “superpower” power-ups available, such as freezing, where you tap an on-screen button and all of your enemies are temporarily frozen. You power-up these special abilities by high-fiving civilians, which increases your popularity. But using a special power like freezing serves no real purpose other than giving you a little more time to run into your targets.

I also had one other problem, which won’t be an issue for everyone. As a player constantly plagued by motion sickness, The Hero caused one of the worst bouts I’ve experienced in some time. It happened when I reached a timed challenge, where randomly appearing bombs had to be found and destroyed (by — you guessed it — running into them) before a countdown clock ran out. The arrows had me flying all over the screen in every direction, and since there’s no variation in the main character’s speed of movement, I was dizzy and sweating long before the timer ran out.

The Hero HD is a classic example of a decent idea executed poorly. The game stumbles over its own control scheme, which drains all the fun out of the experience.