by Robin Parrish 11 years ago10 months ago
2

We’ve talked a lot lately about the Hand Stylus, which aims to be the world’s first fine-tip stylus. Does it live up to the hype? It’s time to put the Hand through its paces and find out.

Everybody wants a fine-tip stylus. Don’t try to deny it; if you use a stylus on your iPad (or iPhone), you wish it had a narrower tip. But the fundamental problem at the heart of every stylus is the physics of the touchscreen. The screen’s touch-sensitive glass only registers a stylus (or a finger) if a space of at least four millimeters is mashed against it. Think about that. By comparison, common mechanical pencil lead widths range from .3 millimeters up to .9 millimeters. Even the biggest of these is less than a quarter of the surface area a touchscreen requires to work. 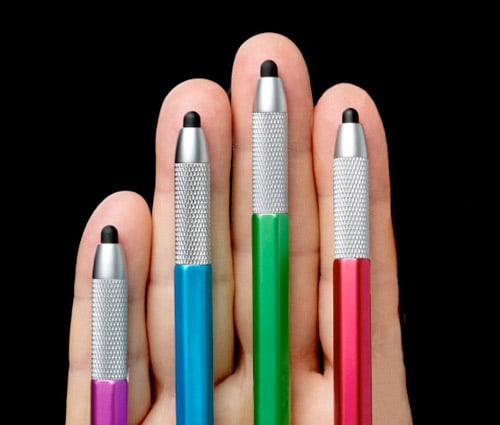 The Jot Pro attempts to get around this issue with the use of a swiveling plastic disc that attaches to the end of its (very narrow) tip. I haven’t tried the Jot Pro yet, though a number of users (and Apple Gazette readers) swear by it. But from the outside looking in, that disc seems like an added complication that could detract from the natural feeling of using a real writing or drawing instrument.

So why hasn’t anyone tried creating a stylus with a tip that’s the minimum usable width? Wouldn’t that come the closest to simulating a fine-point tip as is possible? The Hand Stylus takes up this challenge with a tip that’s precisely four millimeters wide — the exact bare minimum that it can be. The tip is roughly half the width of the eraser on a number two pencil, and it does feel remarkably like using a normal writing instrument, with a perfect weight, great balance, and a solid, metal feel. But there’s more to the Hand than meets the eye. 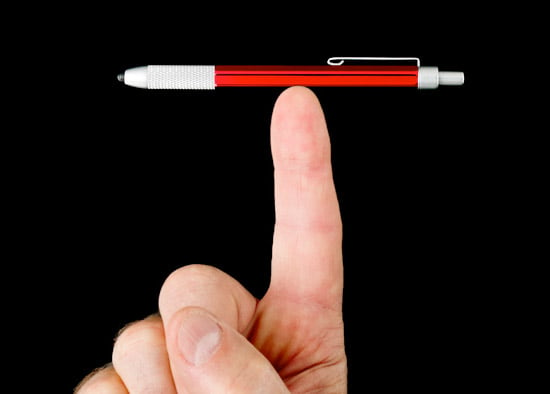 The whole thing is very smartly made. It’s about the size and shape of a standard mechanical pencil, with a similarly knurled metal grip and hexagonal shape. The tip is retractable — a first for a stylus, to my knowledge — which is a big deal in and of itself because it protects the tip when it’s not in use. (This may sound like a small thing, but anyone who’s ever used a stylus extensively understands how welcome this feature is.) Not only does it pull the tip inside the body, but every time it retracts, it rotates the tip slightly. This is another ingenious feature that’s guaranteed to extend the tip’s life. And when the tip does eventually wear out, it’s very easy to replace; the manufacturer sells an inexpensive six-pack of replacement tips.

There’s a pocket clip that will stick to the iPad’s Smart Cover magnetically, which can be removed if you prefer. The clip is useful for carrying the Hand in your pocket, but in my experience the magnetic attraction to my Smart Cover wasn’t so strong that I felt comfortable carrying the Hand around that way. It comes in its own custom tin box, lined internally with foam. (We’re Apple fans here, so yes, packaging definitely matters!)

In practice, the Hand feels great in the hand, more like a mechanical pencil or writing pen than any other stylus I’ve tried. The tip might be the smoothest and most responsive of any I’ve tried. It feels particularly right when used for handwriting, such as signing your John Hancock. But despite the decreased surface area of the tip, I noticed no difference in how I used it. I thought maybe I’d have to have to press the tip down harder to get that full four millimeters of contact area — my real fear being that pressing too hard could push the metal barrel down onto the screen and scratch it — but it isn’t necessary to push it that hard at all. It really does feel like using a pen or pencil, just with a softer, smoother tip.

Is the Hand right for you? Like every other stylus, it depends on what you’ll use it for. The Hand seems most ideally suited for drawing, architectural drafting, and handwriting, but it worked beautifully for everything I tried it with.

So there it is. The results are in, and I’m calling them definitive: finally, someone has gotten the stylus just right. If you need a stylus, the Hand is the best one money can buy.