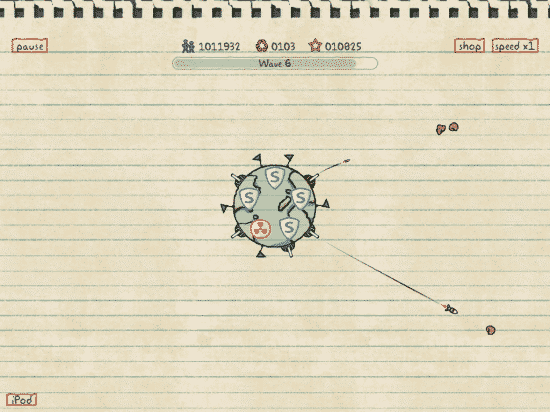 If a game of Asteroids or Missile Command on your iPad sounds like fun, you could do a lot worse than Doodlegeddon, by developer Three Sprockets.

The planet Earth is under attack from a swarm of incoming meteors, and it’s up to you to save it. You start with a single missile silo on your small planet, which is situated in the center of the screen. Destroy meteors by tapping on them, and much like Missile Command, there’s a brief power-up time involved after you fire, which you must wait for before you can fire again. As the game progresses, more and more meteors are unleashed on your Earth, but the game solves the power-up problem by granting you up to ten missile silos, which become unlocked by your progression. You don’t have to worry about which silo will do the shooting; the game automatically selects one for you for each shot you make. 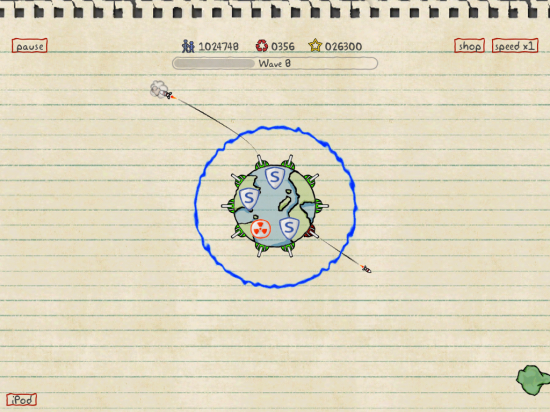 There are also extras that you can purchase, such as nukes and force field shields which surround the entire planet. These become particularly helpful in later parts of the game, when the really big meteors are unleashed on you, that can take multiple hits to destroy. There are also satellite and alien ships to occasionally hit, which provide you with shields and weapons that you don’t have to buy.

As you might imagine, the game is ultimately about quick-tapping on the screen. The better hand-to-eye coordination you have, the higher you’ll score. 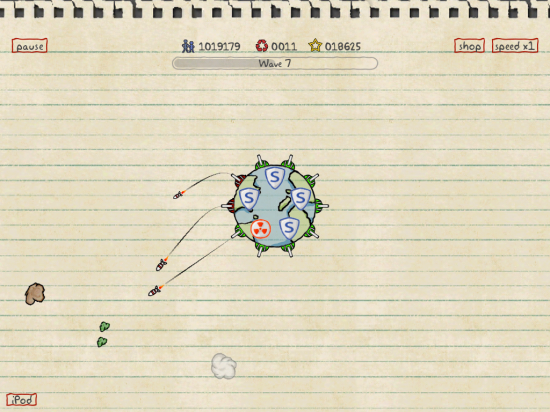 The game is cleverly stylized to look like it’s taking place on a notepad, with all game elements being hand drawn. This adds more to the experience than you might expect, but it can also be a hindrance, since all of your stats and options are displayed as buttons overtop of the gameplay area. Which means you won’t be able to help hitting the buttons at times, when you’re aiming at meteors that happen to pass beneath said buttons. 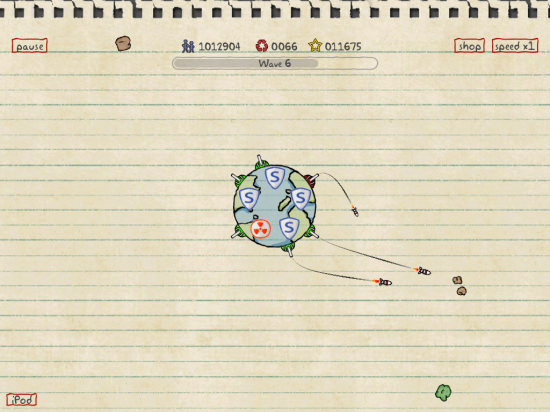 That’s just about the only criticism I can come up with for Doodlegeddon. The game is OpenFeint enabled, and it includes support for your iPad’s music library. You can also choose to play at regular speed or 2x speed, which is a nice option for those who want a faster-paced game (though it makes things twice as challenging).