â€œNo Lukeâ€¦I am your father,â€ said Darth Vader to the distraught and hysterical Luke Skywalker. How did they get to this point? Well with a bloody good, kick-ass Lightsaber battle, of course!

Free from the Apple Store is the Star Wars â€œLightsaberâ€ application. Boot up the epic program and pick from Darth Vader, the evil Maris Brood, the Apprentice from the game â€œStar Wars: Force Unleashed,â€ Rahm Kota, the Jedi Shaak Ti, or a customizable Jedi which you can create yourself.

Choosing Darth Vader, the screen displays his helmet on a space background, and his personal Lightsaber rests there also. Clicking on the music notes at the bottom of the screen streams the epic background tunes of the fierce saber battles from George Lucasâ€™ movies!

Clicking on the Lightsaber then covers the screen in the saberâ€™s red beam, which hums like the real thing! Swing your iPhone like a Lightsaber, and simulated crashing sounds collide, as if the player was really swinging a Lightsaber around.

Though there is not much of a game to the Star Wars â€œLightsaberâ€ App, it is still a lot of fun to customize and make a personal Lightsaber for oneâ€™s dog, who will ultimately reject the Dark Side of the Force with a bark and a luminescent aquamarine-blue Lightsaber! 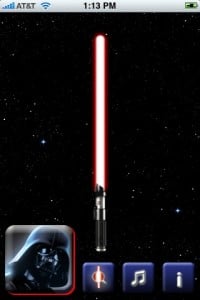