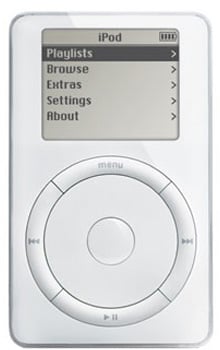 October 23rd, 2006 marked the fifth birthday of the venerable iPod. You see them everywhere–on the streets, on the train, at the mall, and perhaps you, or even your kids, own one. Or two. Or three. The iPod has been hailed as Apple’s saving grace, having helped bolster the company’s bottomline and brand awareness, and the timing of its introduction couldn’t have been better. Yet just five years ago, it was just still Apple’s new baby. It was talk of the town, yes, but it still had much to prove, both in terms of being a platform and a viable business model.

Today we’ll take perspectives on the iPod from both its introduction in 2001 and the present day, after all history’s lessons have been learned and after the world has seen five generations of iPods. Here we will learn that the iPod has been–and always will be–designed from ground-up to be all about the music. Maybe that’s why it’s so successful that it’s still in the lead in the digital music player and music store industry (with iTunes), considering its creator’s core competency had been personal computers. (Zune? What’s that?)

Flashback to five years ago, when the iPod was just being introduced. There was much to be said about the iPod, both positive and negative. On the good side, the excellent user interface and the tight integration with iTunes made the iPod light years ahead of its competition, which still used clunky interfaces and third-party syncing software that were difficult to use, if they worked at all. As a plus, the iPod used FireWire, which offered lightning-fast syncing, when the competition was still on USB 1.1 and users had to wait overnight for syncing to finish.

A drawaback, though was that the iPod didn’t have the bells and whistles that other music players marketed as advantages, such as FM and satellite radio tuners and voice recording capabilities. Also, the too-tight integration to the desktop-side software came with a bad side. For one, the iPod could only be used on a Mac, and was even more limited by the fact that it could only connect via FireWire (while modern Macs during that time all had FireWire, older ones did not).

Apple banked on the iPod creating a halo effect, meaning people will like the iPod so much that they would go on purchasing Macs to go with it, considering the device won’t work with a non-Apple computer.

Whether or not Apple had been successful in banking on the iPod’s halo effect, much can be said about how the iPod helped jumpstart the online music business, with Apple’s embracing the MP3 format. It is actually ironic that even though the iPod was then a closed Mac-only platform, the format it advocated was not in any way like the format that Microsoft and other companies espoused–Microsoft’s music format was so closed and copyright protected that it was even more limiting than liberating.

On October 23, 2001, Microsoft officially released Windows XP. Apple unveiled the iPod, a powerful MP3 player. One of the great drawbacks of Windows XP – and there are many – is that it does not support MP3s. Microsoft wants Windows users to stop using the preferred format for music piracy (ignoring the fact that a lot of MP3s are not pirated) and force Windows users to adopt the Windows Media Player (WiMP).

Without saying it in so many words, Apple has embraced the popular MP3 format and promised continued support by releasing iTunes 2 and the iPod. Microsoft wants to take away your MP3s; Apple wants you to enjoy them.

Fast forward to five years later. Much has changed around the world and even within Apple and the iPod itself, but one thing remains. The iPod is still very much primarily all about the music. The very advantages and even the limitations that were its foundation at the start were beneficial to the success in the market the iPod has enjoyed the past five years, and still does today.

Apple had a plan, followed through on it, and didnâ€™t deviate from it over time. It made a simple product that to this day performs the same task that it did on the day it was announced. It might do other things today, but those are secondary. The iPod was all about the music.

For one, the iPod’s interface and the excellent integration with iTunes and the iTunes music store stuck–this model was not changed over the course of five years. This let users just focus on enjoying their music. No frills meant no headaches. No extraneous functionalities meant no fumbling about. It’s all about the music.

The iPod’s tight Mac OS-only integration wasn’t meant to last, though as Apple opened up to the Windows world with iTunes a year after the iPod’s first release. The same was the case with FireWire. With the onset of faster USB 2.0 connections (which all modern Macs also had, and which was practically ubiquitous as well in PC world), FireWire was ditched in favor of USB. Still, the iPod maintained that tight integration with iTunes that still left no room for fumbling and headaches.

It’s still all about the music.

So to sum it up, in its five years of existence, the iPod is still ahead of the pack, and is likely to stay that way for the foreseeable future. The reason? Through five years of change and non-change, the Apple iPod has been and is still so damn good at what it does. It’s all about the music.