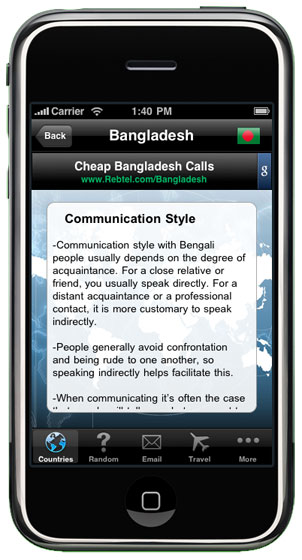 Want to backpack across Europe, hike the Australian outback, or get around the South Pacific without starting riots?

Then get to know the local customs and culture educate for the numerous nations across the globe with the free â€œWorld Customs & Culturesâ€ application for the iPhone.

Contrary to popular belief, not everyone in the world follows the same handshakes, greetings and abnormally loud speech in the public and private spheres like Americans do. Part of traveling and experiencing a different culture from oneâ€™s own means becoming cultured, which is a tricky task without a guide.

The â€œCustomsâ€ App is an extraordinarily simple means to research greetings, communication style, personal space, eye contact, views of time, gender issues, taboos and laws pertaining to scores of countries. The â€œCustomsâ€ App also locates, via GPS, which country an explorer is in should they hike through a few Eastern European nations in a day.

All of the countries are displayed on the touch-screen in alphabetical order with the countriesâ€™ flags beside them. When in Singapore men generally greet one another with handshakes, though it is important to note that there are three major ethnicities including Chinese, Malay and Indian; Malay men, for instance, shake hands with the salaam and a slight bow added.

Watch out! In Singapore public display of affection is considered offensive, and another taboo is standing with hands on hips or arms crossed on the chest, as Americans frequently do, because this body language signifies to the people there that you are angry. The â€œWorld Customs & Culturesâ€ App is invaluable!