7 iOS 9 Tricks You Need to Know

by Justin McGee 7 years ago8 months ago
3

On September 16, Apple started pushing out updates of its latest operating system, iOS 9, to iPhones and iPads all over the world. With iOS 9 comes a sizable upgrade to iOS 8, but most of the upgrade is under the hood; several of the updates that you’ll actually use aren’t immediately discernible when you begin using iOS 9, so we have put together a list of the 7 iOS 9 tricks you need to know to get the most out of your iPhone experience.

In the era of seemingly daily data breaches from giant companies that we once felt we could trust with our data, we have to be even more careful about who we trust with our information. Whether its our banking information or just family photos from the holidays, we have to take extra measures to be sure that our personal data is secure, and iOS 9 (coupled with the upcoming OS X El Capitan) improves an extra feature that has been protecting our data in previous iterations of iOS and OS X: two-factor authentication. 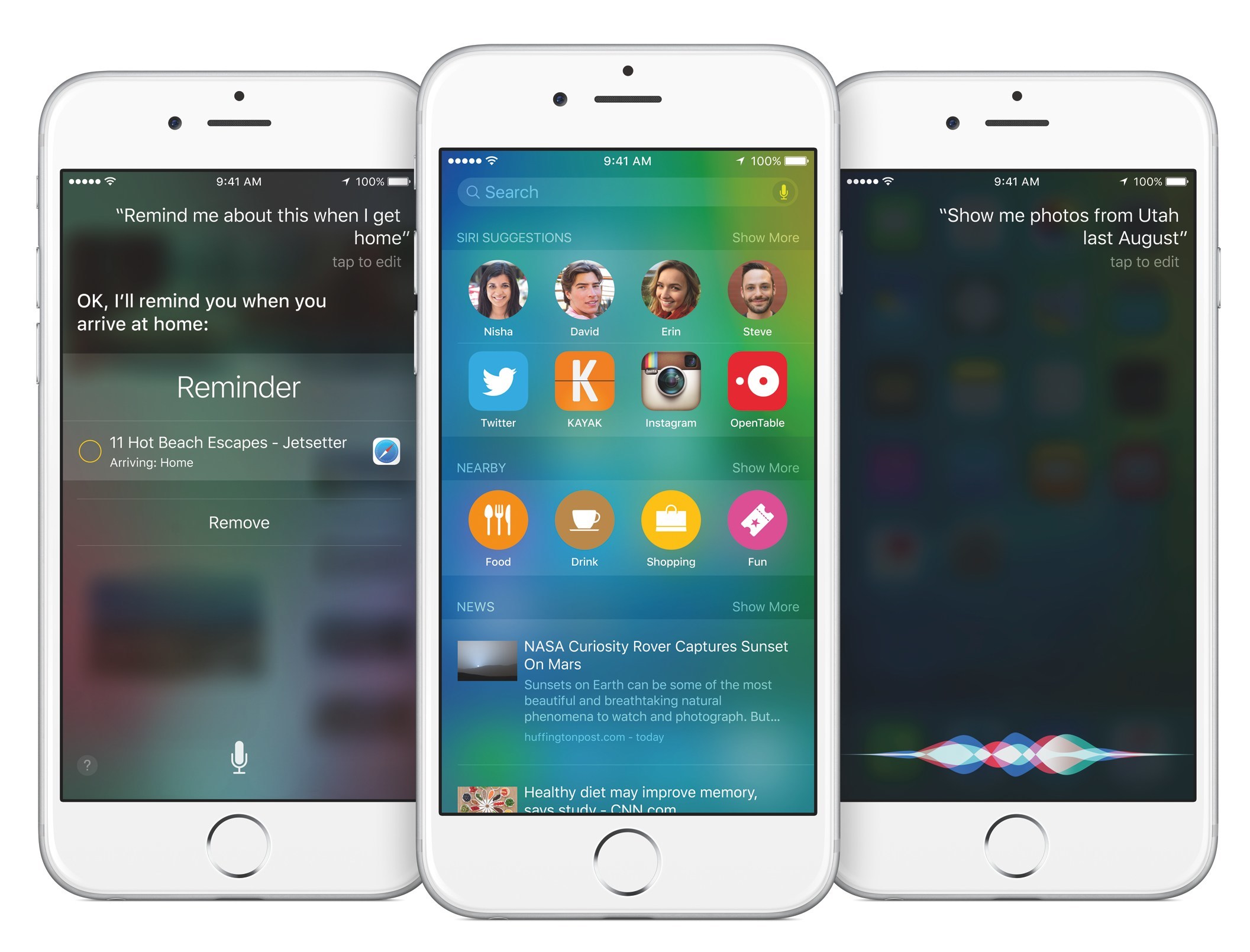 If you have a Gmail account, the chances are that you’re already fairly familiar with two-factor authentication; it’s the process of sending a verification code to your cell phone before you sign into Gmail. For Apple, the process works similarly, but in addition to sending a text message to your cell phone, Apple has the ability to send a verification code to your other iOS / OS X devices, making it quick and easy to secure your electronic data from unauthorized users.

With the introduction of iOS 9, Apple has definitely stepped its game up for the native Notes app. Until this release, Notes has always been a quick place to jot down a thought or two, but beyond that, it wasn’t ever really that functional, a weakness that opened a wide door for great third-party note taking apps to walk through. But the new and updated Notes is an app you’ll actually want to use. 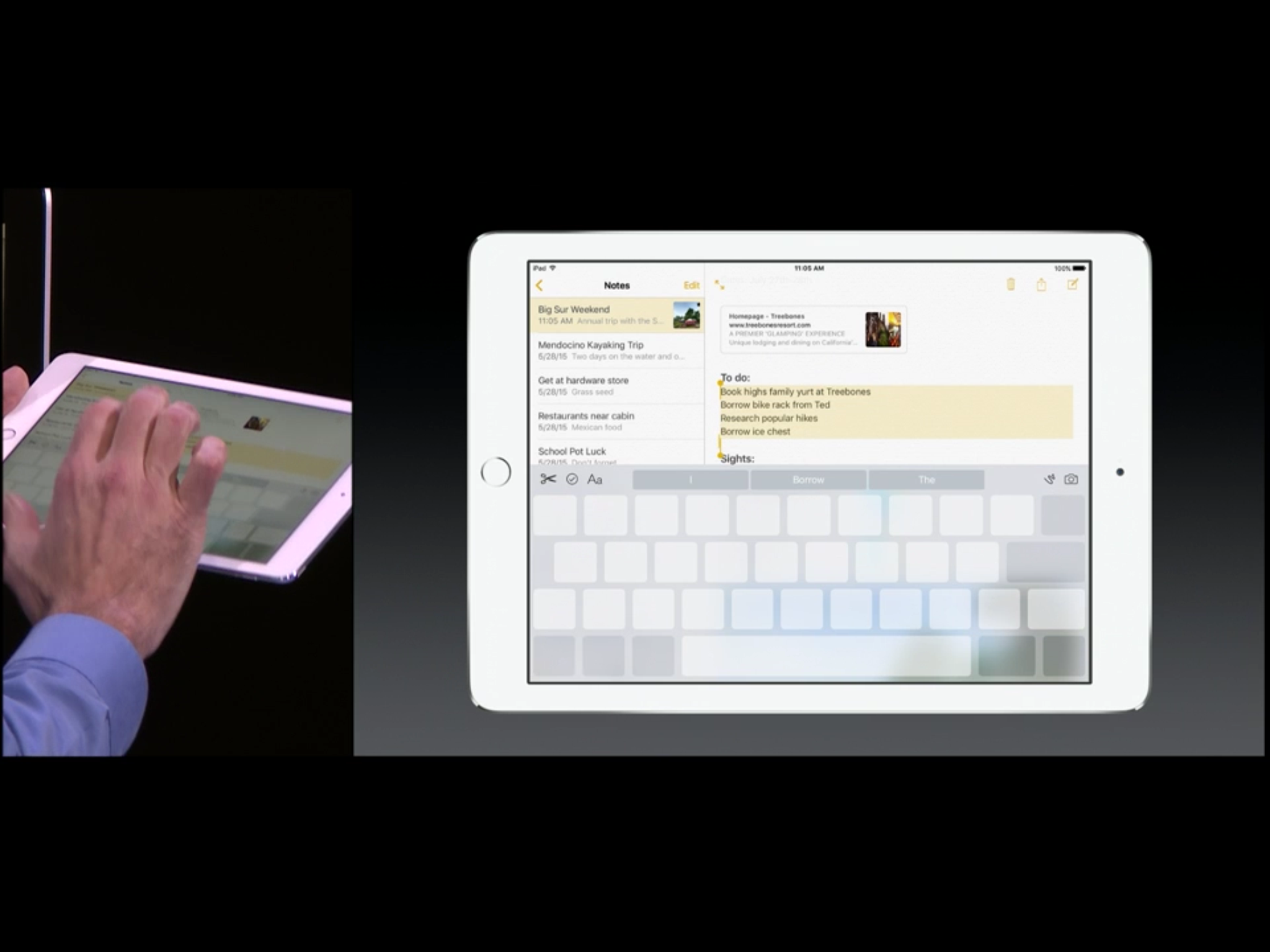 Apple has updated Notes to make it fully capable of handling checklists, photos, maps, sketches and web clippings. If you’re invested in the Apple ecosystem, Notes gets that much better; all of your notes are available on all of your Apple devices, synced and ready to go.

Warning: the updates to Notes may actually make you ditch Evernote.

3D Touch is the one of the iOS 9 tricks that as been available since before iOS 9; 3D Touch was first introduced on the Apple Watch, but with the introduction of the iPhone 6s and iPad Pro, it appears that Apple is bringing the new technology to several of its devices. 3D Touch is, at its most basic level, a way to right-click on a touch screen; it gives users a new way to access an extra menu inside an app. To do a 3D Touch, simply press down forcefully on your screen.

On its own, 3D Touch isn’t revolutionary, but in the hands of the right developers, 3D Touch may be able to be more than simply another way to access a menu. If you’re using an Apple Watch, you probably already have an idea of the possibilities for 3D Touch on a larger screen.

News is Apple’s long-rumored answer to other news-curating apps like Zite and Flipboard. Like the third-party alternatives available on the App Store, the more you use News, the smarter it gets. When you first start using the app, it will ask you to select a few news sites or blogs that interest you; from there, News will remember what you like to read and curate a reading list just for you. You can always add or delete favorites from the app as well. 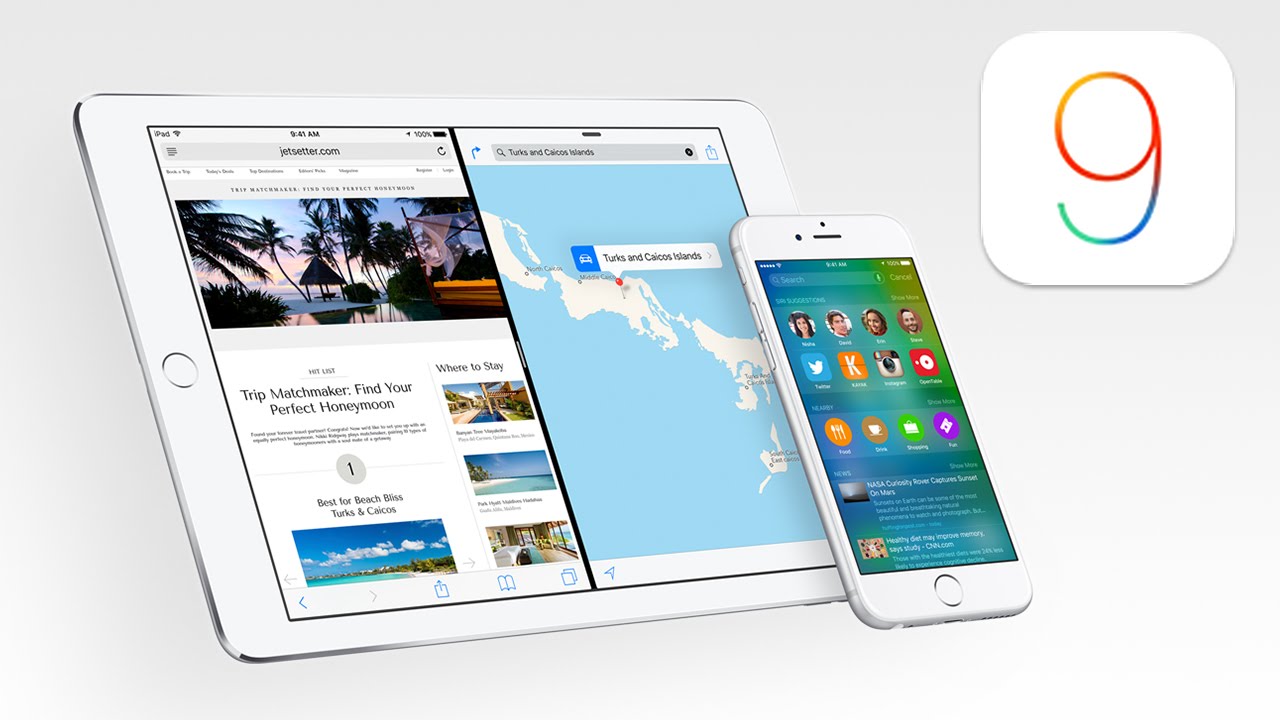 Is News good enough to replace your tried-and-true news-curating app? Maybe. While large publications seem to work well on News, it seems that smaller blogs and websites can’t compete. As time goes on, News will certainly get better, but it might be a little too early to delete Flipboard.

Accessing Spotlight on your iPhone and iPad has never been easier: just swipe left from your home screen! This new spotlight is one of the new OS X El Capitan and iOS 9 tricks, and in the case of iOS 9, the update packs a lot into its new Spotlight screen. Siri’s suggests the friends that you’ll mostly likely need to contact and your four most popular apps. The “Nearby” section gives you restaurants, coffee shops, shopping and gas stations near your location. Another great addition to Spotlight is its new ability to search third-party apps, making it easy to find notes and messages sent from non-native apps.

Finally, of all the iOS 9 tricks, this one is probably the one that most people have been looking forward to. For the first time, iOS 9 brings true multitasking to the iPad. It’s part of Apple’s push to make the iPad more productive. Features known as Slide Over, Split View and Picture in Picture comprise the iPad’s multitasking. Slide Over allows you to open an open without leaving the one you’re using; Split View is what most people consider multitasking—running two apps at once; and Picture in Picture allows you to watch videos or FaceTime while you’re using other apps. 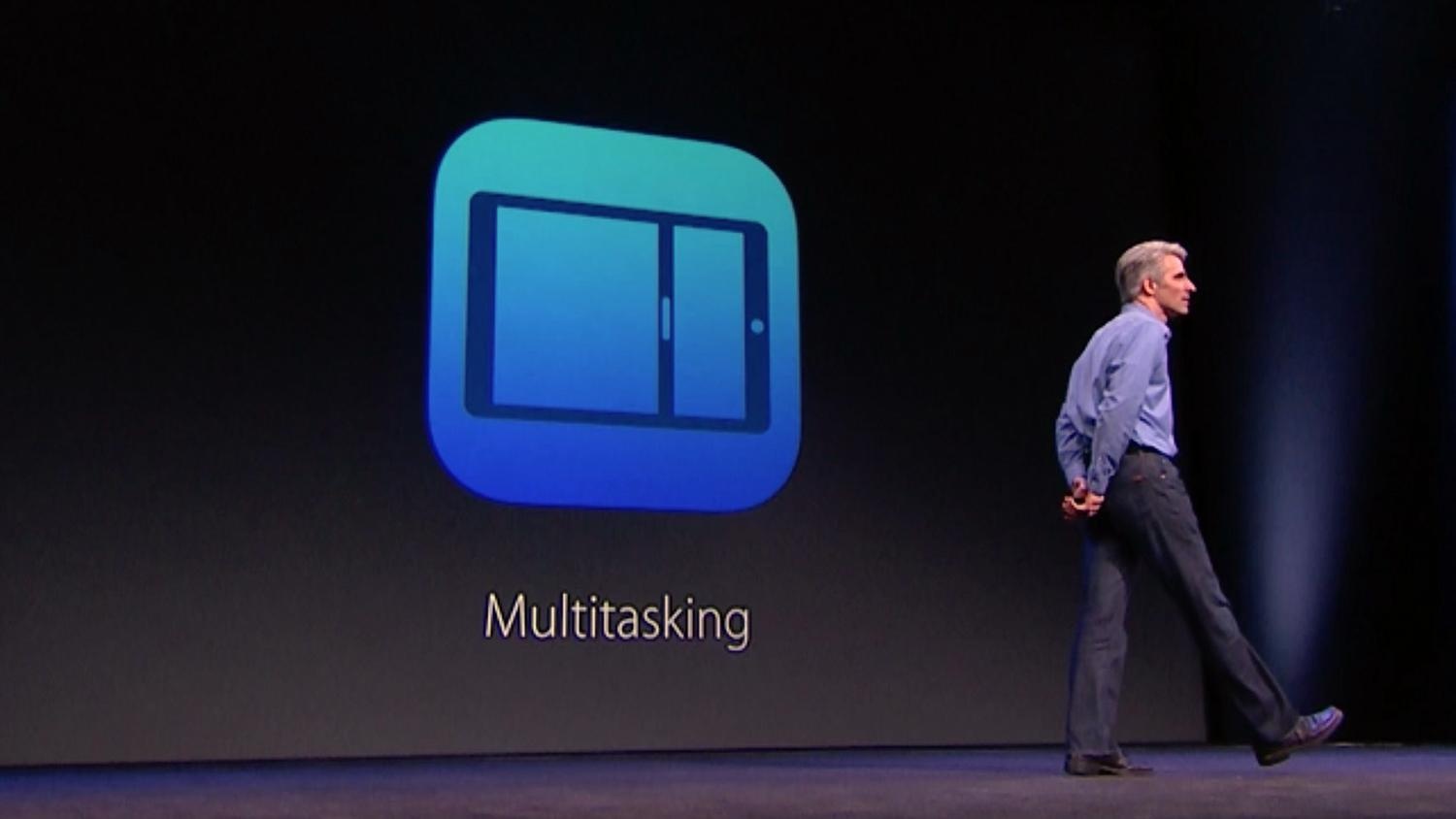 If you haven’t yet updated to iOS 9, the new features offer quite a bit of value to your iPhone. With that said, many of them don’t jump out at you. (Seriously: how long would it take for you to swipe left from your home screen and Spotlight?) But these 7 iOS 9 tricks will help you navigate this update. 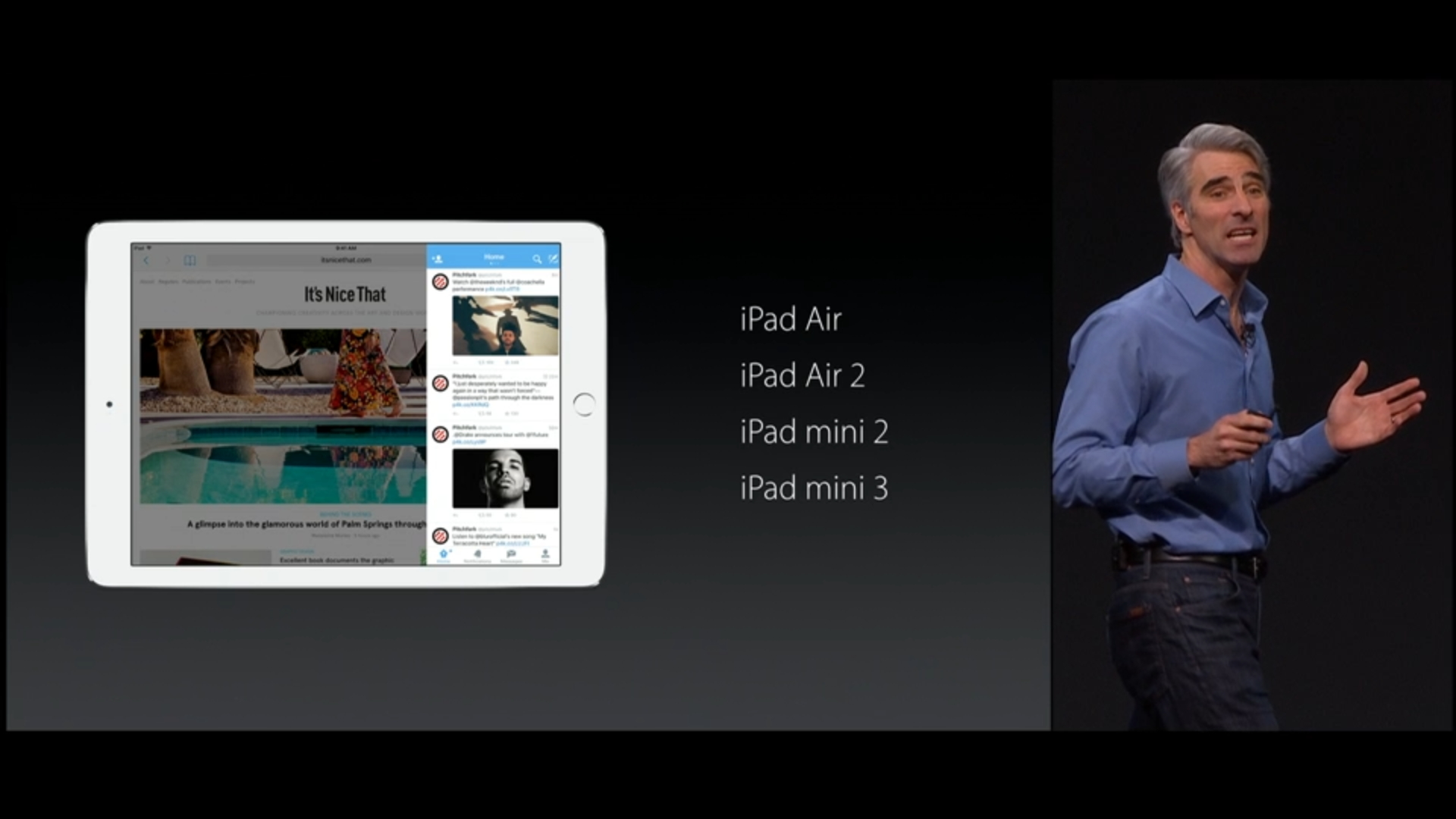 Are you already on iOS 9? If so, what are you enjoying the most? If not, what are some of your concerns about the new OS? Do you have more iOS 9 tricks? Let us know in the comments below.