You are here: Home / iPad / The iPad Subscription Theory 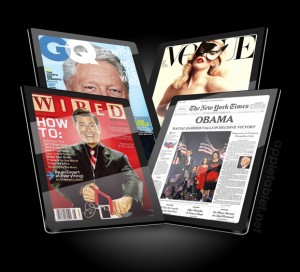 I like magazines. I write for them, I take pictures for them, and I have them stacked up around my house. I look forward to the latest issue of Wired coming to my mailbox, and I love going to Barnes & Noble to hunt for the latest editions. I like the texture and feel of the page, but I also like seeing what’s new and what choices the designer made. All that said, I know that 10 years from now, magazines will be hard to find on shelves -if there at all- and will be replaced by online versions of what they are today.

This is, of course, what all this internet stuff was leading up to. Publishers have been trying to figure out the web for years now, and very few have actually made it work for them. The problem is ultimately in the amount of money they stand to make. At a typical magazine, a full page ad can sell for upwards of $10, $20 or even $100 grand. Not so on the web. It’s more about numbers here, and it gets a bitÂ finicky. Not that you can’t make money on the web, that’s obviously not true (or I wouldn’t be getting paid for this post). But it’s not the millions of dollars that the typical magazine is used to raking in, so most of them have chosen to ignore it.

As is to be expected, it’s now biting most of them in the ass. The iPad IS what the magazine will be. It’s the perfect form factor and package for a typical magazine, and there’s no reason why that shouldn’t be exploited. Because of their lack of experience with the web, most publishers are chasing their tails to figure out how to get their books online. Once again, people aren’t really getting it, and I’m not sure why.

This was all prompted by this article in the Wall Street Journal about the iPad and advertising. A lot of big numbers were thrown around, and then there were two paragraphs that set me off.

But the business model is unproven, and ad dollars will initially be a fraction of the industry’s overall revenue. Hype over the iPad unveiling two months ago focused on selling subscriptions for the device, but no major magazines appear ready to do so yet, according to people familiar with the matter. That leaves titles like Time and People, Men’s Health and Hearst Corp.’s Esquire to offer weekly or monthly iPad editions of their magazines, priced at or near the cover price of a print issue.

So what you’re saying is that what the iPod did for music and to a lesser extent the movie industry, you’re just not willing to try? History shows that Apple has a track record of getting old media back in the spotlight. Now you’re not going to hop on and ride it to the top?

Let me tell you a little secret: The web does so well and can be profitable because you don’t have a lot of – if any – overhead. Buy a domain, setup a hosting plan and you’re on the web and potentially making money. Any kid in his basement can setup an AdSense account and start bringing in scratch if they can make the hits. It’s still not easy to do – or else everyone would be doing it – but it can be done. Hard work, quality content and generally good journalistic values can help make it work.

Magazines, by in large, are not small organizations. There’s the publisher, editor, assistant editor, copy editor, art director, graphic designer, editor in chief, sales people and of course, the other corporate trappings like an HR department and payroll, as well as the higher ups like the CEO and COO. All those people make a lot of money each year, and deservedly so. But now, they’re going to have to consolidate or wait in the unemployment line. Low overhead is important, and most magazines don’t have it.

That’s why seeing $17.99 a month for the Wall Street Journal makes me mad. It strikes me as greedy, frankly. If you want to get the Wall Street Journal online for a week, it’s $1.99. Quick math tells me that four weeks of the online only journal is $7.96, it’s $9.16 a month for the print version, and $10.76 for both. Now why do I need to pay the extra money? Additional content? Exclusive stories? Or is it more likely trying to capitalize on the hype of the iPad and pure greed.

Want to know how to make money on the iPad as a publisher? I’ll tell you this huge secret. You ready? I’m not even going to charge you royalties for this.

That’s right. Crazy, huh? Charge exactly the same as you charge now and you’ll make more money. After all, you’ve got no stock to purchase. No buybacks from bookstores for unsold copies. No shipping and distribution expenses. Just the cost of your staff, and that’s it. It’s not like it costs anything for the app to go to iTunes, right? And sure, you’re going to split some money with Apple. That’s easily less than you spent on the fancy building, the physical magazines or the CFO’s last bonus check.