Preparing for the iPad Waiting Line 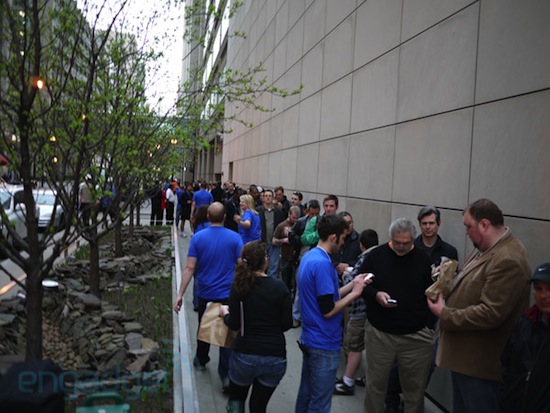 I spent some of my day today driving to one of the Apple stores by my house so I could look for accessories. It was the same store that I went to a few years back to get my iPhone 3G, and it’s a bit bigger than my usual store, the Apple Store in Chandler Fashion Center. I was optimistic that I could find a messenger bag for the iPad, but alas, no luck. Instead, I talked to them a little bit about the iPad Wi-Fi+3G launch, and how it was going to be handled. There are no pre-orders for this launch, so it’s all first come, first serve. It was then that I decided that I needed a strategy.

I work all day, and I’m a bit behind for the week as it is. I just don’t have time to spend my day planted in front of the Apple store, and even if I did, I don’t think I’d actually do it. I’ve spent over 8 hours in line for products before, and it never really goes well. Since the official release time is 5 pm today, I think that realistically, I’m good with hanging out at the mall for two hours or so, and then seeing what I can do. If I get it, I get it. If not, no biggie.

But there’s another option here, too. When the iPhone 3G came out, I wasn’t there for launch day. Instead, I drove by the Apple store the previous night, and I stopped in to talk to the salespeople. Sure enough, they still had iPhones – lots of them. But it was too late for me to wait in line to get one, so I had to come back the next morning. We did – somewhere around 3:00 am the next morning – and my wife and I walked out with a new iPhone. The only problem I had was getting the right color.

So at this point, I could either show up to the mall at 3, wait in line, then hopefully walk out with an iPad. Or, I could show up at 8 pm, get into a (hopefully) shorter line, then pick one up. Yet there’s also a third option.

I went by the Apple store a few days after the original iPad launch, and I overheard a conversation between a salesperson and a customer. They had iPads in stock, they were just the 64gb model. That’s what I’m looking for as well. Since it’s the most expensive iPad, it’s also the one that should still be in stock Saturday morning. Granted, that’s not a hard and fast rule, but it’s a gamble that might save me some time in line.

But no matter what I do, I’m going to end up in a line somewhere. I’m now debating what to bring with me. Water is a gimme, mostly because I get dehydrated pretty easily and I don’t want to mess with that. I’m considering bringing my MacBook Pro, but I’m not sure if I want to mess with the bigger laptop, which requires me to sit down to use. The iPhone is a gimme, but do I bring my DS? My PSP? How big of a tool do I want to look like?

Either way, I’ve got to get ready to do something. Hopefully I’ll have something to report come Monday morning and if I do, you’ll be able to find it here for sure.