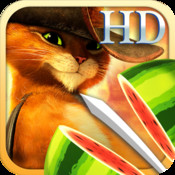 Like its namesake game, Fruit Ninja: Puss in Boots is a simple game with a simple objective, yet wickedly addictive gameplay that will have you slice and dicing for hours, thanks to a terrific new mode of play.

Fruit Ninja is, of course, the enormously successful portable game that gives you the simplistic-sounding goal of slicing virtual fruit with your finger as it’s tossed into the air from somewhere off-screen to the bottom. What gives it staying power are the bombs that are randomly tossed with the fruit, which you must avoid or game over. The bombs turn the whole thing into an exercise in reflex control — not only must you be quick, you must be discerning as well. DreamWorks’ Puss in Boots may not seem like the most obvious property for a tie-in, until you remember that Puss is a master swordsman. His character adds very little to the game beyond a few victory-inspired voice-overs and some fun variants on the blades you’ll use. Those blades include Puss’ standard sword, four claws, a “guitar” blade that looks like the neck of a guitar, a “magic beans” blade (based on a story point from the movie), and inexplicably, a rocket blade. (Maybe this makes sense if you’ve seen the movie; I have not.) You can unlock the differing blades and some Puss-themed backgrounds by achieving feats throughout the game. But these variants are purely aesthetic, changing nothing about the gameplay. What really sets Puss in Boots‘ flavor of Fruit Ninja apart is the “Challenge” mode, a new gauntlet-style series of mini games that each present unique twists on the Fruit Ninja formula. In one small round after another, you’re charged with slicing up all that fruit while avoiding bombs — but in new and unusual ways. There are challenges with sets of shuttered windows that fly open, and you have to quickly slice the fruit behind them, but not the bombs (of course). There’s the challenge with the gigantic, solo bomb bouncing around and obscuring much of the window, while regular-sized fruit bounce behind it; you can guess what the objective is there. Or maybe you’ll have to slice up specific types of fruit on a conveyor while frantically avoiding the bombs that intermittently appear alongside them. The classic game mode is well represented, too, with fine-tuned controls and nicely randomized targets. There are the expected leaderboards and whatnot online components, but nothing resembling a multiplayer mode. The faithful will be happy to hear that tomatoes have finally been added to the mix.

Fruit Ninja: Puss in Boots might not offer quite enough difference from the original game for longtime players, but it’s the best reason yet for newbies to jump on the fruit-slicing bandwagon.