Sources say that “The Brick” is a manufacturing process…

by Michael 14 years ago2 months ago 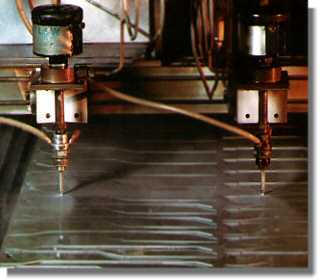 In an interesting turn of events it may be that Apple’s “Brick” rumor may not be a product at all – but a new manufacturing process that would involve 3D lasers and water jet cutting.

According to 9to5Mac this new process would have several advantages:

Carving out of aluminum eliminates the need to bend the metal and create weak spots or microfolds and rifts.

There are no seams in the final product, so it is smooth.

Screws arenâ€™t needed to tie the products together.

The shell is one piece of metal so it is super light, super strong and super cheap.

You can be a whole lot more creative with the design if you don’t have to machine it.

They refer to it as a “game changer”. This could even lead to a U.S. based factory. Computerworld speculates that this could be the culmination of an 18 year dream of Steve Jobs that was first realized during the NeXT days.

This all sounds very interesting. The “Brick” itself would actually be a brick of aluminum that the computers would be cut out of…