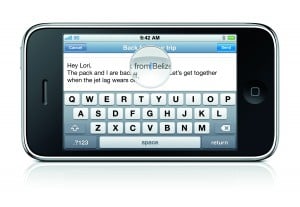 Apple had their big earnings call yesterday, and although I didn’t hear it – I had more important things to do, like, anything – I can read the internet, and that’s where this little tidbit came about. From Gigaom.com, who actually listened to the call:

Tim Cook said corporate usage of the iPhone has doubled since this summerâ€™s 3GS release, noting â€œThis is a key focus of ours.â€ Some 70 percent of Fortune 100 companies are actively piloting or deploying iPhones, and 50 percent of the FTSE 100, according to Cook, who added, â€œThose are some pretty staggering numbers when you think that the time frame weâ€™ve been in the business is only two and half years.â€

This is some pretty huge news. The corporate phone industry has been dominated by the BlackBerry for the past 5 years, mostly because of its ease of integration into an Exchange server, which a lot of big businesses use. Although the BlackBerry brand has some great devices, there’s definitely more demand for the iPhone, and knowing that people who use these things every minute want one, is a step forward. Many people argue that the keyboard on the iPhone isn’t good enough for big users, but it seems like Tim Cook has evidence to back up the contrary.

Now let’s see what happens next year after the Unicorn Tablet has been out for a year.