by Robin Parrish 10 years ago10 months ago
3

If you’re hired by Apple and remain in their employment for several years, Apple HQ sends out some nifty thank-yous to commemorate your anniversary with the company. Take a look.

As near as I can tell, Apple awards employees who have been with the company for 5 years, 10 years, and 20 years. For all I know, they may do it for 15 years as well, but I’ve been unable to find any evidence of that. And staying with Apple as long as 20 years is pretty rare, so I can’t imagine very many have made it to 25 or higher.

For employee anniversaries, Apple used to give plaques signed by the company’s CEO (very likely Steve Jobs). This appears to have been dropped in favor of a fancy etched glass sculpture sometime around 2011 or 2012, which is now given to 10-year veterans. More on that later.

Here’s a look at the awards of yesteryear.

Prior to Steve Jobs’ return to the company in the late 90s, 5-year employees received a plaque that looked like this: 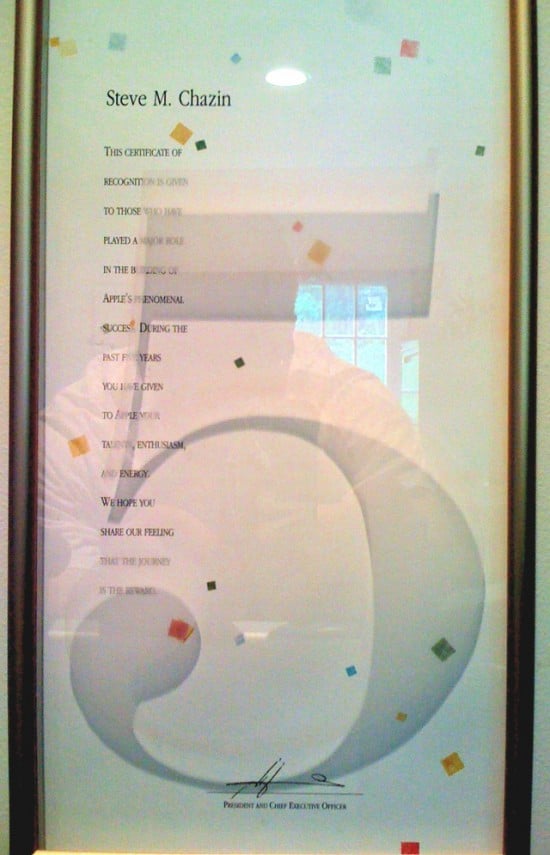 Recipients at the time were also given a golden apple pin with a diamond inset, and get this: a 6-week sabbatical! There’s no way today’s employees would get this kind of break; that’s exactly the kind of thing Jobs likely put a stop to upon his return. (I’d love to know what employees of this era received for 10 years of service or more. If anyone has knowledge of this, please let us know.) [Image by Steve Chazin]

Side note: does anyone recognize the CEO’s signature at the bottom of the plaque above? It’s definitely not Jobs (compare it to his signature below), and it doesn’t look like John Sculley’s either. My best guess is Gil Amelio, but I’m not positive.

After Jobs returned, the plaques were upgraded to something that probably better suited his sensibilities. Here’s the 5-year plaque from the Jobs era: 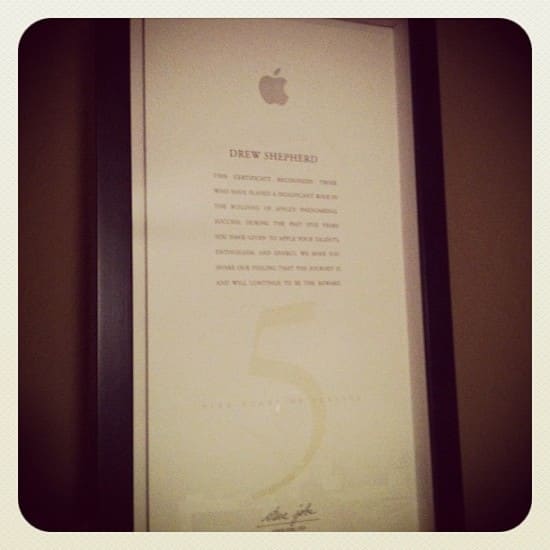 Today, the 5-year plaque has been downsized to the following, which is more in keeping with the company’s current design philosophies: 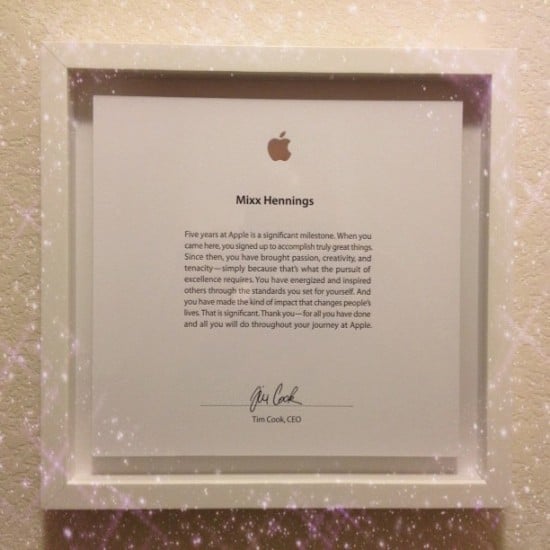 I think it’s safe to assume that the photographer added the sparkle effect. [Image by Mixx Hennings]

I have no images of 10-year awards from previous eras, but it’s safe to assume it was similar to the first two images above. These days, 10-year employees are the recipients of a snazzy etched-glass award that looks like this. The iPhone is for size comparison: 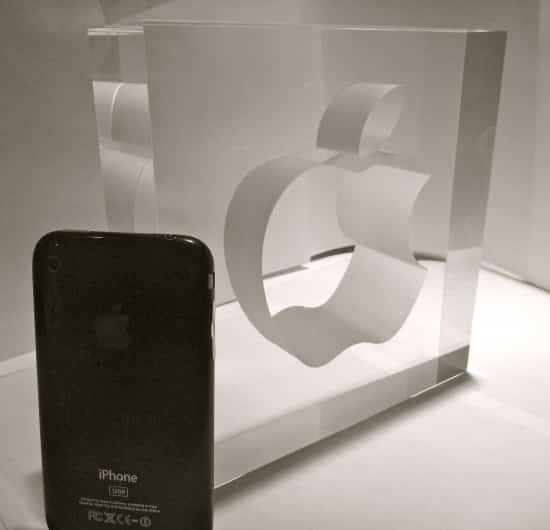 According to a story by a commenter at Gizmodo who claimed to have first-hand knowledge of this new award, it’s made of a “high lead content” glass that’s “vapor-honed (sandblasted with a water slurry)” to cut through its thick surface, leaving behind an uncommonly soft feel. His story goes that Corning, the company that created the Gorilla Glass used in the iPhone, had a division of theirs called Steuben create a gift for Steve Jobs as a thank you for all of the business he gave them. What this gift was exactly is unclear, but it was made of this same high-lead glass. Jobs was reportedly so impressed by its quality that he asked them to produce these glass blocks with the Apple logo etched out of the center as a gift for 10-year veterans of the company. [Image via Gizmodo]

Side note: Steuben Glass is no longer in business, but Corning apparently continues to produce the 10-year gifts in their place.

Gizmodo’s commenter also posted a photo of an unpolished prototype that he owns. He was allowed to keep it because he helped develop the process by which the Apple cutout was etched. Here’s that picture: 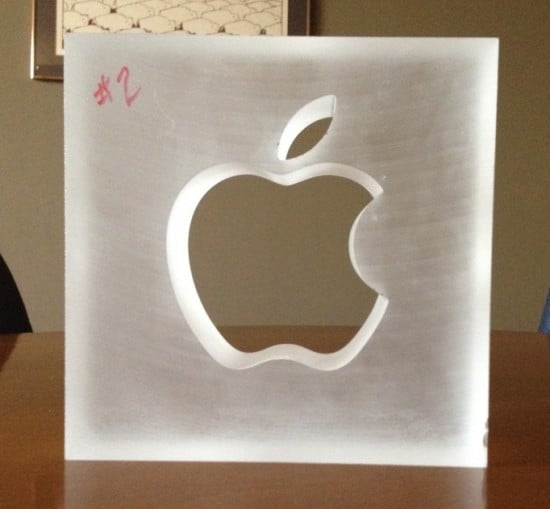 Employees who receive this glass block also get a letter of congratulations, that looks like this: 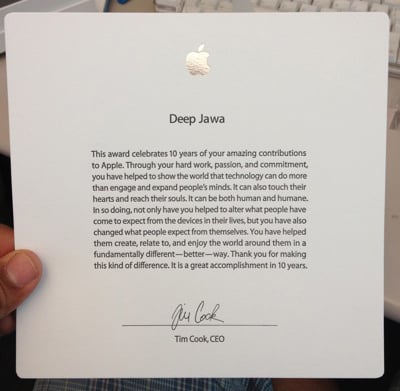 It also comes with a note explaining how the block is made. Needless to say, it’s an elaborate process. 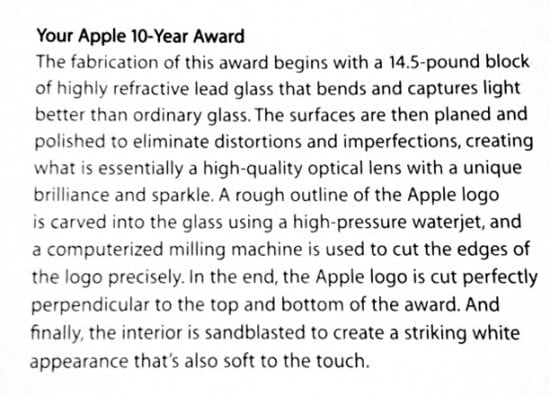 As I mentioned before, there’s also a 20-year award for employees who’ve stayed with the company for that long, and I believe this to be a very rare thing. I have no idea what 20-year veterans receive nowadays, but here’s the plaque that was presented to these employees as of five years ago: 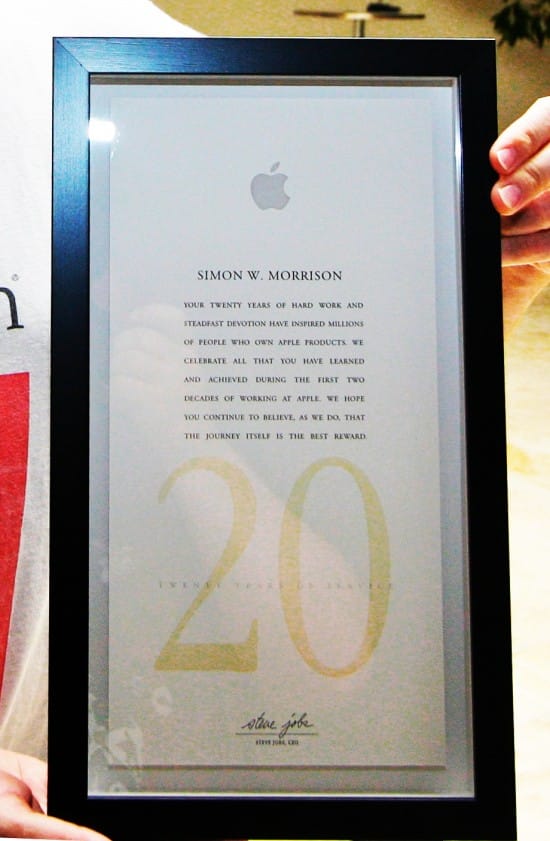