You are here: Home / Apple Culture / Soon, the Genius Bar Will Be Gone and You’ll Be Sitting on a Stool Instead 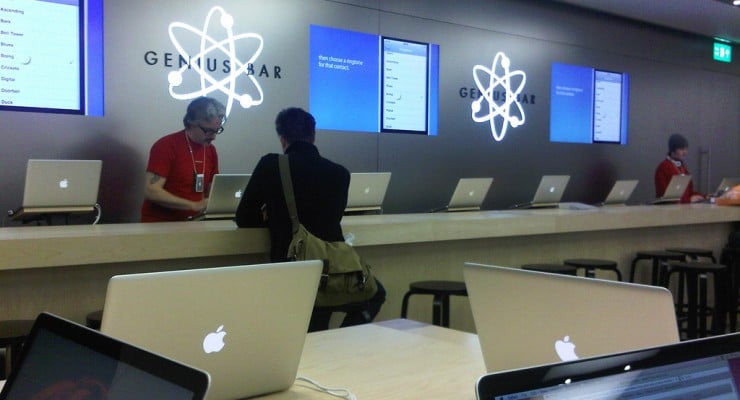 No one loves going to the Genius Bar simply because that (usually) means you have something that’s not working right. And everyone hates that. Still, we can’t resist that call every time we pass by an Apple Store. It’s just not right not to go in even if we’re not planning on buying anything.

Even the Genius Bar itself is good in spite of some horror stories we’ve heard. The Genius Bar is part of the Apple Store. It just is there.

But soon, that may not be the case.

CNET’s Chris Matyszczyk tells the story of how he discovered that there was no more Apple Genius bar at his local Apple Store. He narrates:

But one thing struck me above all: The Genius Bar had been stolen. It had vanished, I assumed, in some sort of overnight raid.

Instead, they had put down some temporary stools to fill the space. They were elegantly laid out, I had to admit.

Surely you would have reacted the same way if it had happened to you. How would you be able to talk to a Genius who may or may not be able to fix your device? How would you not interact with other Apple users at the bar as you wait for a Genius to assist you?

They’re not ordinary stools, mind you. Matyszczyk describes them:

They’re square but have a round indentation for your bottom. They look like they were made by the local craftsman who comes into the pizza restaurant with his dog, only for you to wonder why he’s always alone and what had his last lover done to him. All you know is that he puts a lot of heart into his stools.

That round indentation probably makes all the difference, but there’s also the fact that Geniuses are now sitting beside you, face-to-face, without a literal bar between you and him.

How did Matyszczyk’s experience pan out?

He says the Genius was in high spirits – more than usual. It seems he was a happy customer in spite of his phone not being fixed.

Maybe the fact that we won’t see a single Apple Genius bar in future isn’t that bad. After all, change is inevitable – even if it comes in the form of stools with indentations for our bottoms.

Take a look at the stools here.