You are here: Home / iPad / How To: Get the Most Out of iPad’s Virtual Keyboard 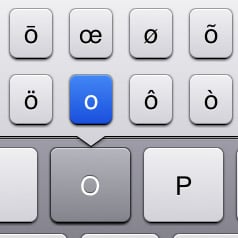 If you have an iPad, you have to contend with the virtual keyboard. And chances are, you hate the blasted thing. Typing without the tactile feedback of actual keys is a drag, and it doesn’t help that the keyboard appears to be very limited in what it can do.

Although the keyboard doesn’t seem to give quick access to specialized characters — you typically have to tap the “.?123” button to get to specialty characters, and from there you might even have to then tap the “#+=” to find some of the more obscure ones — this is one instance where you shouldn’t believe your eyes. Apostrophes and quotation marks, for example, are just a tiny swipe away. Swiping upward on the period key will insert a quotation mark, while swiping up on the comma key will insert an apostrophe. Don’t believe me? Try it!

Here’s another good one. Holding down on many virtual keys will bring up a mini menu of refined options that you can choose from. For example, holding down most vowel keys will reveal alternate forms of that letter, such as the accented and tilde-topped letters used in languages beyond English. Some consonants do this too, and there are even a large selection of symbol characters that offer this option. Holding down the question mark or exclamation point will give you the added option of inserting upside down versions of those same characters. Holding down the dollar sign will present you with yen, francs, euros, and more.

This even works in Safari with the “.com” button. Hold it down and you’ll see other common domain name extensions, such as “.net” and “.org”. You don’t get these kinds of options with traditional keyboards.

With a little practice, you may come to find that the iPad’s virtual keyboard isn’t the enemy you think it is. It’s just a different kind of keyboard. And sometimes different can be pretty cool.