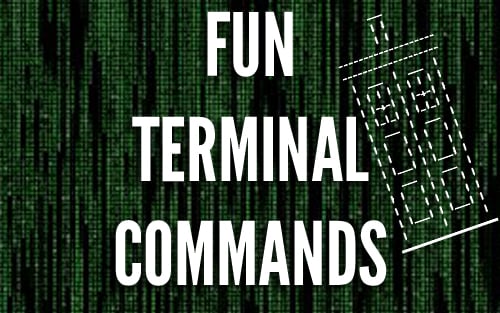 When people think of fun they rarely think of Terminal. The utility at the heart of OS X, Terminal can do just about anything and is already known for some pretty interesting tweaks, but there are some less dangerous and more fun commands you can enter into Terminal and have some fun while you’re at it. Here are 5 fun Terminal commands to try right now. It’s that time of year again when the snow falls as much as the temperature, but if you haven’t seen enough snow yet or just want some right on your desktop you can make Terminal into a tiny UNIX snow globe with a simple command.

Before you enter it, however, you probably want to change how Terminal looks to get the full effect.  Launch Terminal and hit Command + i on your keyboard to change Terminal’s theme. I recommend Pro for the best white on black effect.

Once you have the window looking right, enter the following string into Terminal and hit Return:

Immediately you should start seeing snowflakes fall and collect at the bottom of the screen. To stop it, hit Control + Z to stop the snow. The Terminal window will look a bit wonky when you end the snow, so type clear and hit Return to clear out everything that was typed.

This uses up about 5-10% CPU to run, so while not a huge power hog, you should probably close it if you’re taxing your system with other commands. Click the full screen button for a nice screen saver, too. If all that snow has you thinking of the ice planet of Hoth, then two things are probably true. First, you’re a pretty big Star Wars fan and two, you’d probably enjoy an ASCII text-based version of Start Wars Episode IV: A New Hope.

If at least number two is correct then open up Terminal and enter the following command in, followed by Return:

Note: This is actually connecting to a site where Star Wars ASCII lives, so you need an Internet connection for this one to work.

Sit back and relax while ASCII Star Wars plays out in front of you and if you have IPv6 you’ll even get color! Now that you’ve got a movie in it’s time to play a game. Luckily Terminal comes with a few old-school retro games that just about anyone is sure to love.

In Terminal, type in the following command and hit Return:

Once the emacs screen loads, hit Esc + X on your keyboard. This will give you a place to type. Type out one of the following games and hit Return:

When you’re done playing hit Ctrl + X and then Ctrl + C to exit. While a few of these games are a little vague, the major ones like Tetris, Pong, and Solitaire are classics that never get old. Did playing those games remind you that you don’t have anyone to talk to? Well, Terminal has the cure for that, too! You can get Terminal to say anything you want it to with a simple command. Just type in say followed by whatever you want Terminal to say and you’ll be kept company by the soothing voice of UNIX. 5. Get Some Mental Help

If all this working in Terminal has you a little shaken up, you should probably talk to someone about it. Luckily Terminal has a built-in psychologist ready to hear all about your troubles.

You actually access Terminal’s shrink the same way you get to games (that tells you something about the quality of the counseling you’ll get). Type in  emacs again but this time after hitting Esc + X type in the word doctor instead of the name of a game.

This doctor doesn’t come with a TARDIS or a degree, but it’s definitely fun to play with but it might end up driving you to a real psychologist after not too long.

Hopefully you can see that Terminal doesn’t have to be all work. You can actually have a little fun with it, too.

While we can have fun with Terminal it’s definitely a utility that is worth learning more about. You can fix a lot of issues and even customize your Mac all with this simple looking tool.