You are here: Home / Siri / Cortana Versus Siri: Who Takes Home the Cake? 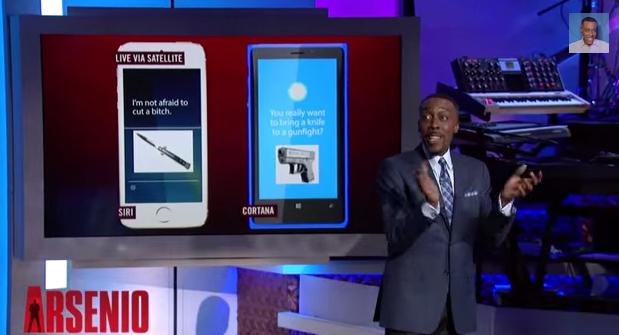 Microsoft recently launched its version of Siri and calls it Cortana, a name well known to Halo players. We know just how sassy Siri can be, but it looks like Cortana can hold her own. The Arsenio Hall Show thought to have some fun and came up with a Cortana versus Siri showdown.

Even as a Mac lover, I had a hoot listening to the two sass each other out. Of course, Hall didn’t help things! Here’s a snippet of the Cortana versus Siri exchange, courtesy of Geekwire.

Hall: Hey Siri, I’m a little hungry, can you find me a restaurant that serves grilled cheese?
Siri: OK, I will play Alicia Keys.
Cortana: Are you deaf, bitch? He said grilled cheese.
Hall: Cortana, where can I find a good grilled cheese?
Cortana: In your damn kitchen. Why is everybody so lazy?
Siri: Looking up a florist that sells daises.
Hall: No thanks, Siri, but that’s very thoughtful of you.
Siri: That’s how I am, unlike some operating systems.
Cortana: Really, ho? You got something to say to me?
Siri: Actually, I’ve got nothing to say to you, you fake wannabe.
Cortana: All I wanna be is kicking your ass up and down Sunset. Would you like me to get you a map?

I suggest you watch the whole video and entertain yourself for a few minutes.