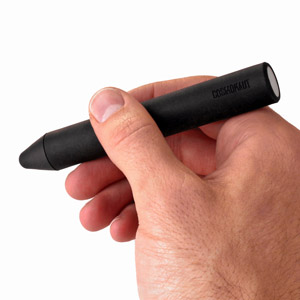 It’s probably the oddest stylus you’ve ever seen. At first glance, it seems to be a big, black crayon. In reality, the Cosmonaut is the stylus, reborn. Re-imagined from the ground up, it’s an effort to throw out all the rules and create something a whole lot smarter.

Anyone who’s ever tried to draw letters or sketch on an iPad knows that as handy and capable as the human finger is, it’s just not the ideal tool for touchscreen precision. So the marketplace is filled with one stylus after another, each trying to become the artist or idea person’s best friend. There are a lot of great ones, but they’re all built using a similar blueprint — one that imagines a stylus as a virtual pen, pencil, or paintbrush.

The Cosmonaut is different. Its creators at Studio Neat had an epiphany when they realized that writing or drawing on an iPad isn’t like writing on paper or painting on canvas. It’s got more in common with writing on a dry erase marker board, thanks to its smooth surface that erases easily (depending on what app you’re using). So they took a big step back and attempted to come up with an entirely new kind of stylus, one more like a dry erase marker. As they put it, the iPad needs a stylus that’s “fast, simple, and low fidelity.” The first time you hold the Cosmonaut — after opening the smile-inducing cardboard packaging it comes in — you’ll feel the difference immediately. Its got some real heft to it, feeling very solid and confident in your hand. It has a rubber grip that’s easy to hold and won’t ever slip or slide in your fingers, and its tip is an entirely different kind of rubber. I don’t know exactly what this material is, but it’s soft, durable, and flexible, and slides across the screen smooth as ice. The tip is sure to be a cause for concern from the skeptical. Believe me, I was too the first time I saw the thing online (before holding a Cosmonaut for myself). The whole thing looks so bulky, and its tip appears to be rather wide, so you’re probably wondering how precise it is. Let me alleviate your fears: it may not be the finest point on the market, but it’s a lot finer than you think, and it was extremely accurate with every app I tried it on.

It’s great with artistic apps like SketchClub and ArtRage, but I think it’s most ideally suited for something like Paper, because it’s all about brainstorming — jotting down ideas and making quick sketches. The developer behind Paper, FiftyThree, recommends using Wacom’s Bamboo stylus, a perfectly fine accessory, but I used the Cosmonaut with Paper for drawing and jotting down ideas, and it felt as if the stylus and the app were made for each other. It works with any capacitive touchscreen, not just iPad, including iPhone and (grumble grumble) Android devices. You can get it with an aluminum or wood “accent” at its base. The only downside I found is that its rubber grip has a very coarse texture that seems to attract lint, and a lot of it. I kept finding myself wondering why the grip wasn’t made of the same smooth, soft rubber used for the tip. But I assume that wasn’t feasible for some reason — and it certainly wouldn’t provide the same powerful grip. The Cosmonaut began as a successful Kickstarter project, and now it’s available to buy online for $25. It’s the perfect stylus for artists and handwriters, and I think it’d make a great accessory for the iPad user who’s generally averse to a stylus, as well, because it’s so unique. There’s simply no other stylus that can match the tremendous sense of mass and power that the Cosmonaut conveys — and you can’t understand that feeling until you hold it in your own hand.

I’ve tried many a stylus over the years, but I have a new favorite. It’s fantastic.