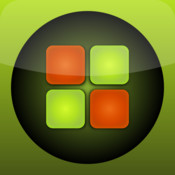 The blank grid you start with

There are so many apps out there, and iTunes does a terrible job of showing us all of the can’t-miss stuff. Today I’ve got a $.99 app you’ve probably never heard of, but which you every iOS user should own. Because it’s without a doubt one of the coolest apps I’ve ever seen.

A developer named Spool created BeatForge, but don’t bother looking them up. You won’t discover very much. Their website is practically empty. And the description of BeatForge that’s in the iTunes Store is remarkably brief. It turns out, there just isn’t that much that can be said to describe BeatForge. Like the Matrix, you have to see it for yourself. My first creation. I started with the diagonal line and then added more as I went. The result was really cool.

The app presents you with a simple grid. A vertical line moves across it sideways, and when you type various squares on the grid, they activate sounds that play when the line passes over them. Typically, the top half of the grid represents musical notes, while the bottom half is for various percussion sounds. This unassuming UI presents you with nearly infinite possibilities for creating fun, original musical beats and sequences. It’s one of the cleverest uses for iOS’ touchscreen interface I’ve ever seen.

I tapped random squares just see what would happen. Yep, this sounded cool too.

The brilliance of BeatForge is that it automatically keeps every sound in time and in harmony, so no matter what you do, it sounds great. Because of this, absolutely anybody can create music. I don’t play any instruments (I took several years of piano when I was young, but it’s long gone now), but the beats I put together just fiddling around with BeatForge turned out fantastic no matter what I did. I tapped some patterns, and was presented with soothing melodies. I tapped completely random squares and it resulted in sounds more of electronica kind of complexities. And it always sounded good, no matter what I did. It’s impossible to make bad music with BeatForge, and that’s its genius. Okay, so how about a simple line pattern? Still good!

But there’s more to the app than just the music grid. Swipe a finger down, and the grid slides about halfway down the screen, revealing a list of options. You can change the grid to different kinds of pre-programmed sounds, such as rock guitars or video game-style pings, for a total of 8 different sound grids. There are nine different chords that you can switch around, which adjusts your music sequences accordingly. There’s also a shuffle button, that automatically randomizes the chords for each cycle. This goes a long way toward keeping your music from becoming repetitive. Then there are five sets of beats, which you can alter at will, each one giving your music a different kind of rhythmic sound. Mixing-and-matching these various options vastly opens up the possibilities for what you can do. You can change any of these options on-the-fly, as your song is playing, to see what your current creation sounds like with each. There are also “play” and “stop” buttons, a “clear grid” button, and a meter for changing the rhythm’s speed. Finally, the are options for saving your song or playing pre-made ones. That doesn’t mean you can record your own songs. BeatForge remembers your grid layouts and option selections, but it doesn’t offer any means of recording the music you play (though there’s nothing to stop you from recording your beats with your own external equipment!). It simply plays your grid in real-time, and will go on forever until you tell it to stop. Finally, I tried drawing a shape. Not sure what I was going for, but even this sounded awesome.

Intuitive and endlessly fun, BeatForge is one of the smartest and most enjoyable music apps I’ve ever encountered. The only thing it lacks is the ability to share your creations with others. But the price is right, at just $.99. If Spool updates it regularly with new sound options and allows users to share what they make, BeatForge could easily become one of the hottest tickets on iTunes.