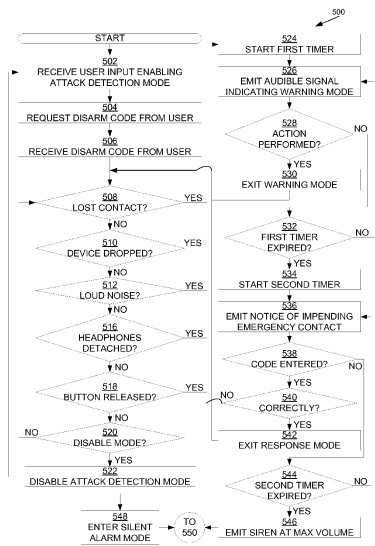 It wouldn’t be right to end the week without another cool patent granted to Apple, right? The Attack Detection Mode on iPhones is something that everyone should be excited about, as it’s not just another feature that would make things more convenient for this generation of instant gratification seekers. If it does get implemented, the Attack Detection Mode on iPhones will actually save lives. The patent is officially titled “Mobile Emergency Attack and Failsafe Detection“, and is described as:

This implies a lot of things, depending on how exactly Apple implements its ideas, but the essence is that, in the future, we may have iPhones which combine software and hardware resources to detect a potential emergency situation. When this happens, the phone goes on attack detection mode and can do a variety of things:

We know there are apps and even accessories that do similar things, but if this feature is integrated in future iPhones, that would certainly raise the bar for other phone manufacturers.