You are here: Home / iPad / Why You Should Skip the iPad Mini 3 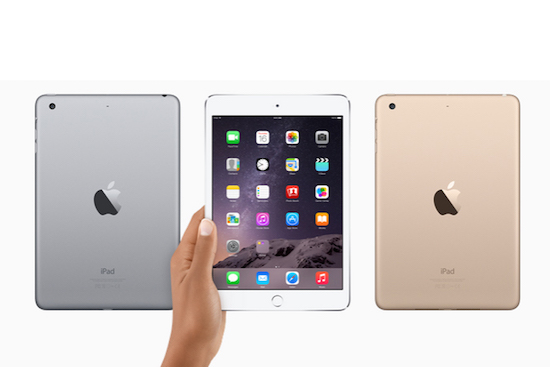 Last week, Apple held a special event on its Cupertino campus to unveil several new products, including two new additions to the iPad family. At that event, both the iPad Air 2, and the iPad Mini 3 were shown off to the media for the first time, with one of those devices receiving an impressive update, while the other barely saw any significant changes at all. In fact, while it is easy to recommend the iPad Air 2 now looks like it just might be the best tablet available today, it is actually difficult to find a single good reason to recommend the Mini 3 to anyone.

When designing the iPad Air 2, Apple managed to include a vastly improved processor in the form of the new A8X chip, a crisper, more responsive screen, and a greatly improved camera as well. They even managed to add Touch ID, which allows the iPad to interact with Apple Pay when shopping online.

Of those fantastic upgrades, the Mini 3 only received Touch ID, arguably the least important addition possible from that entire list. In all other aspects, the Mini 3 is exactly like the Mini 2, which was released last October. The two tablets have the same processor, Retina display, cameras, memory, and storage capacities. The only difference is the inclusion of Apple’s fingerprint scanner for the first time.

Don’t get me wrong, Touch ID is a nice feature, giving users the ability to unlock their iPhones and iPads simply by using a fingerprint. It adds a nice level of security to mobile devices, and the fact that it ties in with Apple Pay will come in handy over time. But to not upgrade any other aspects of the Mini 3 is incredibly disappointing, particularly for those who had been waiting for an update. To make matters worse, Apple continues to sell the iPad Mini 2 as well. The older model is available from Apple at a $100 discount over the latest version of the Mini. That means that you can actually buy the exact same products – minus Touch ID – at a far more attractive price. And if you’re willing to purchase a refurbished model, you can save even more money.

It is perplexing why Apple didn’t update the Mini 3 further. While there may have been some unknown technical reasons why the A8X chip wouldn’t work in the smaller tablet’s form factor, a standard A8 would still have have been greatly appreciated. The A8 is the same processor that powers the iPhone 6 and 6+, and it would have provided significant performance gains over the old A7 processor that the Mini 2 and 3 now share. Similarly, the new iPhone’s updated camera would have been a nice upgrade too, offering better low-light performance, enhanced video options, and cleaner images all around. There are absolutely no technical reasons why this upgrade couldn’t have taken place either. It is almost as if Apple put no effort into the Mini at all this year. They simply slapped on a fingerprint scanner, and decided to call it a day. It is understandable why the company put so much effort into updating the flagship iPad model each year, as margins are better on those more expensive option. But to almost completely ignore one product altogether is almost inexcusable, not to mention incredibly disappointing.

Unless you happen to love Touch ID, or are planning on using Apple Pay frequently, there is simply no reason to purchase an iPad Mini 3 over a Mini 2. The two devices are identical in every way, save the fingerprint scanner, and the larger price tag. If you’ve been considering purchasing an iPad Mini, then save yourself some cash and go with last year’s model. Chance are, you won’t even notice the lack of a fingerprint scanner at all.

On the other hand, if you’re like me, and were hoping for a more substantial update to the Mini line, you may want to consider waiting a year. Next year’s model is bound to be much improved.